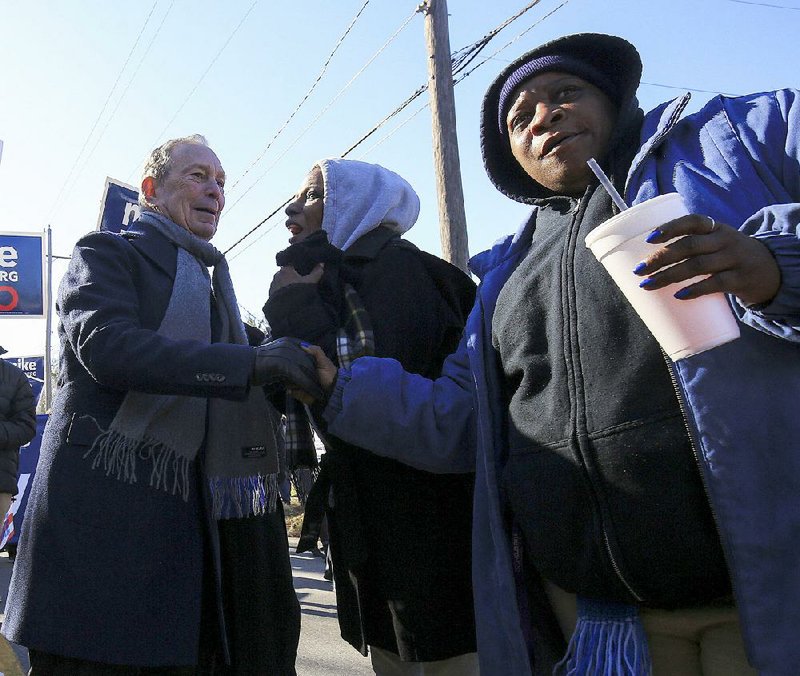 As he led the parade past scores of onlookers on Martin Luther King Jr.'s Birthday, Bloomberg stopped every few blocks to pose for selfies or chat with someone who stepped into the parade route to speak to him.

Bloomberg's campaign team walked behind Little Rock Mayor Frank Scott Jr. and joined him in tossing miniature candy bars to children. Scott has not endorsed a candidate for president.

A late entrant into the race for the Democratic nomination, Bloomberg has been forced into a strategy of largely overlooking the first four voting states -- Iowa, New Hampshire, Nevada and South Carolina. Instead, his campaign has focused on states voting in the "Super Tuesday" primaries on March 3, including Arkansas.

Bloomberg's decision to celebrate the Martin Luther King Jr. holiday in Little Rock also eschewed the options to appear in larger Southern cities such as Atlanta, with its rich haul of Democratic delegates, or Memphis, where the mayor has endorsed Bloomberg.

[Video not showing up above? Click here to watch » https://www.youtube.com/watch?v=HwI12aPogXw]

"Little Rock has the same history as Tulsa, Okla.," Bloomberg told the Arkansas Democrat-Gazette before the parade.

On Sunday, Bloomberg delivered a speech in Tulsa, once known as the "Oil Capital of the World," that heavily referenced the city's 1921 race riot and burning of its "Black Wall Street" community, according to news reports. As for Little Rock, Bloomberg referred to the 1957 Central High School desegregation crisis.

"In terms of there was a terrible event that took place a while ago, but both cities have changed and evolved and today have thriving, healthy, multi-racial communities," he said.

Bloomberg's first trip to Little Rock came in November, when, just after wading into the presidential race, he appeared in person to file paperwork to have his name placed on the state's primary ballot.

A billionaire media mogul, Bloomberg served three terms as mayor of New York from 2002 until 2013. He served first as a Republican, then as an independent.

Upon entering the Democratic primary, Bloomberg began his campaign with an attempt to make amends for some of his administration's policies in New York City, most notably the method of "stop-and-frisk" policing that led to increased stops of black and Hispanic men. In the interview with the Democrat-Gazette, Bloomberg said of the policy, "I've apologized, and I wished I'd apologized earlier."

"I focused from the day I got into office on reducing the murder rate," Bloomberg explained. "I think in the third term I realized it [the policy] had grown out of control. [The city] tried a little experiment, stopped it, saw whether the crime rate went up or down. It didn't do either, so I said, 'Well, let's stop it.'"

There was little apparent tension Monday between parade onlookers, most of whom were black, and Bloomberg.

David Allen, a 70-year-old retired Entergy worker from Little Rock, recognized the mayor as one of his top two choices in the primary and let out a shout of "Hey! Mike Bloomberg!" which the candidate acknowledged as he walked by.

Allen told a reporter that he was also considering another billionaire in the Democratic primary, California businessman Tom Steyer, but that he was leaning toward Bloomberg because of the candidate's background "straightening things out" in New York. Allen added that he was appreciative of Bloomberg's apology for the stop-and-frisk policy.

"He used it when it was working, and when it wasn't, he quit," said Allen.

Farther down the parade route, Keith Morisette, 39, stood watch over a cooker filled with simmering ribs and chicken at the Omega Psi Phi fraternity cookout. "We're still listening" to various candidates, Morisette said as Bloomberg's campaign marched past, which Morisette pointed out to a fraternity brother, 33-year-old William Lamar.

"That's what's up," said Lamar upon recognizing the presidential candidate. "That's a good showing of faith. This is a big event for Little Rock."

Morisette voiced his agreement, noting that the parade had not drawn presidential candidates in other recent elections. "That's actually a big deal," he said.

Of the four candidates -- Joe Biden, Bernie Sanders, Elizabeth Warren and Pete Buttigeig -- near the top of polling averages compiled by the website RealClearPolitics, only Sanders has made a visit to Arkansas during this campaign. Bloomberg, whose polling numbers fall just outside the top four, is the only candidate to have publicly visited the state twice.

Still, not all the Democratic primary voters along the route said that Bloomberg's visits merited further attention.

"I just feel like he hasn't participated like the rest of the people," said Jana Jacobs, a 50-year-old from Little Rock who watched the parade as it approached the state Capitol. She noted that the other candidates were busy in Iowa, where most have spent more than a year preparing for the first-in-the-nation caucuses. "He just hasn't worked as hard for it."

When the parade was over, Bloomberg stopped by a charter school in the Wright Avenue neighborhood to help fill backpacks with supplies that will later be distributed to the homeless.

Bloomberg's visit also drew a statement from the Republican Party of Arkansas.

"While we appreciate Mayor Bloomberg visiting our beautiful state and joining the MLK parade, we also hope it is a sincere act and not a politically expedient gesture simply because he is on this year's Democrat primary ballot," the statement from a party spokesman said.

Despite his history in the Republican Party, Bloomberg has more recently come under heavy criticism from conservative circles because of his financial support for Everytown for Gun Safety, a group that supports tighter restrictions on gun ownership.

Speaking with the Democrat-Gazette, Bloomberg defended his efforts as mayor to crack down on unregulated gun sales, saying that such policies were largely responsible for the number of murders falling by half during his administration.

"You need state laws -- not to take away anybody's guns, not to control, [which] is the wrong word -- but just to have background checks," Bloomberg said. "I think the place we should control is we should not allow anyone to sell AK-47s to individuals."

Arkansas has one of the highest rates of gun deaths in the nation, and the Republican-controlled Legislature has routinely blocked gun-control efforts by groups such as Everytown. 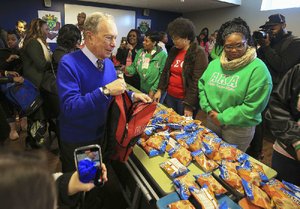