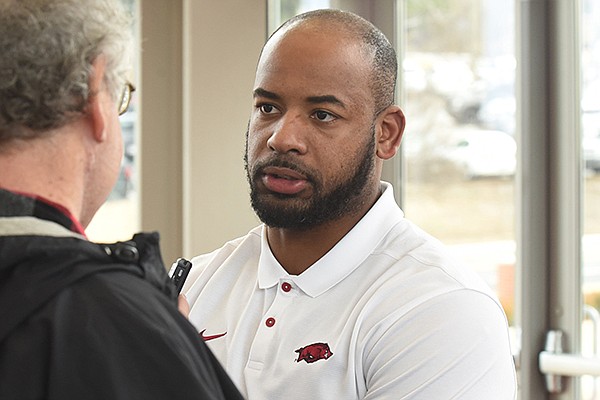 "We talk about everyday," Daniels said. "We talk in the morning and before I go to sleep. He's kind of like my big brother. We're pretty cool."

Daniels, 6-3, 188 pounds, Lucedale (Miss.) George County pledged to the Rebels in November and reopened his recruitment on June 1, saying he made his decision too early but is still considering Ole Miss.

"He was just straight up with me," said Daniels, who's being recruited to play cornerback. "He just shot everything straight up with me. He wasn't sugarcoating anything. He was real with me and he talked about me not just about football like most coaches do."

"They just tell me they really want me, and I'm needed there, and I have a great chance to come there and starting," Daniels said.

He appreciates Carter talking about other things other than football.

Defensively, he had 23 tackles, a tackle for loss, 3 pass breakups and 4 interceptions.

"MJ is the fastest rising defensive prospect in Mississippi," Lemming said. "He has great length. He's known for his hard-hitting style of play."

Daniels announced a top six of Ole Miss, Tennessee, Georgia, Texas A&M, Indiana and Minnesota on July 14. The Hogs offered him two days later and appear to be in the running.

"Arkansas will be in my next list of top schools that I come out with," Daniels said.

He said he's considering going out of state for college.

"Arkansas could be a great place for me to go play ball," he said.

Being a plus-size cornerback has it's advantages.

"I have great hips, so I can get out there and play it," Daniels said. "I love going against receivers my size, and I like it even more when I go up against little guys because it's hard to throw over me."

A lover of the outdoors, Daniels wants his profession after football to be nature related.

"I want to be a federal game warden," Daniels said. "I don't want to be stuck in an office job. I like being in the outdoors doing a lot of riding around figuring out where all the fishing and hunting spots are."

Daniels knows the state of Arkansas is outdoors friendly.

"They do a lot of hog hunting up there and kill a lot of deer," he said. "When I was young, I use to watch a lot of YouTube videos about it."

He gave a rundown on how a school can win him over.

"They just have to show me they really want me," he said. "I really want to go somewhere and change a program and have an impact on that school and forever be remembered as a player."