Sixth person dies from virus in state; cases rise to 426 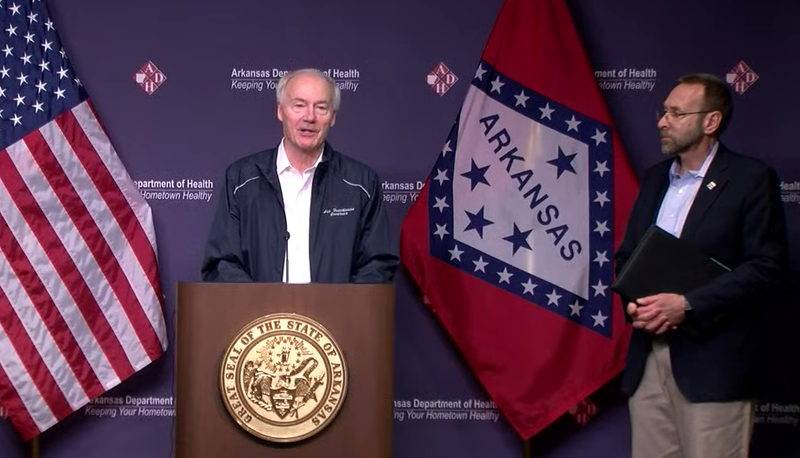 Arkansas Gov. Asa Hutchinson and state health officials speak to reporters Sunday in this screengrab of video provided by the governor’s office.

The number of confirmed positive coronavirus cases in Arkansas has risen to 426, and an additional person has died as a result of the virus, Arkansas Gov. Asa Hutchinson announced Sunday.

Hutchinson provided the updated number in a briefing with reporters. It marks an increase of 17 cases since Saturday afternoon. A total of six people had died from the virus, as of Sunday’s briefing.

Health Department Secretary Nate Smith said the sixth person to die passed away at home and was someone who "had been hospitalized and seemed to be getting better."

"Unfortunately there are many things that are challenging in caring for a new disease where our clinicians don't have years of experience," he said. "They do their best but sometimes people can seem to be getting better and then they can take a turn for the worse."

[Video not showing up above? Click here to watch » https://www.youtube.com/watch?v=MvwLhX4NXQY]

Hutchinson said he was “encouraged that we are not accelerating as fast as some other parts of the country,” attributing the state’s lower acceleration rate to social distancing efforts.

During the briefing, the governor also announced that he signed a proclamation calling Jonesboro and the surrounding region a disaster area. A tornado ripped through the city Saturday night injuring 22 people and causing significant damage, officials reported.

The proclamation will speed up the availability of resources to officials there, according to Hutchinson.

The governor said he planned to leave for the city shortly after speaking with reporters, where he intends to meet with local officials and survey the damage done.

“It certainly is a tough time for Arkansans,” he said.