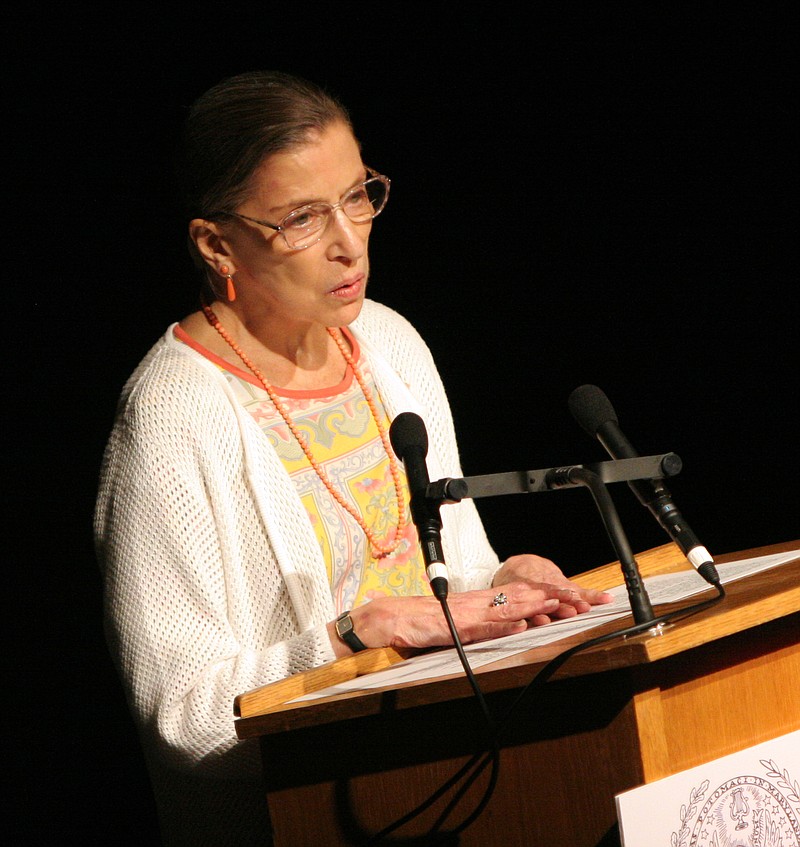 I was in my late 20s, attending a conference for women lawyers in the 1970s. I sat in the front row of a large auditorium for the keynote address. The speaker was Ruth Bader Ginsburg, founder of the American Civil Liberties Union's Women's Rights Project. I was mesmerized.

She was all that I wanted to be. To devote one's life to the fight for civil rights, to use legal skills to effect justice, better yet to make a difference -- I could think of nothing greater. And I was not alone; generations of civil rights lawyers looked to emulate her.

Ginsburg's vision of gender equality was decades ahead of her time. It went beyond just empowering women to compete for "men's" roles. While stereotypes distorted women's view of what was possible, they also impeded men, no less trapped in gender-based assumptions. Equality meant that both sexes should be free to assume all of society's roles without preconceptions. My son can be a caregiver; my daughter can be an executive. When the school administrators wanted Ginsburg to come to school to discuss her son's misconduct, she famously said, "This child has two parents."

Her record as an advocate before the Supreme Court was outstanding; she argued six cases before the court, winning five. If she had done nothing else in her life, that alone would have been an extraordinary legacy.

While she continued to be animated by her life's passion for equality when she joined the court, she was not the "activist" caricature some in the media have portrayed her to be. She was eager to avoid upending precedent, determined to be respectful of the opinions of her colleagues. She believed in incremental legal change and emphasized the limited role that a court plays in a constitutional democracy.

In Ginsburg's understanding, courts have a critical role to play in identifying new understandings of the Constitution, but they must do so by "measured motions." They are part of a dialogue with other organs of government and with the people as well. She was critical of the reasoning in Roe v. Wade, because it had accomplished too much too soon. She was, as The New York Times' Linda Greenhouse described at the time of her confirmation, a "judicial-restraint liberal."

She would apply the court's precedents but take pains to situate them in their social and historical context. A Ginsburg decision would tirelessly recount the history of gender-based classifications, the "stunningly anachronistic" generalizations about men and women, as she described them, that were embedded in the law.

When, shortly after she joined the court, she wrote the majority opinion requiring that women be admitted to the all-male Virginia Military Institute, her analysis was classic Ginsburg: a lengthy description of the school, its prestige, its role in preparing men and only men for high-status roles in government and industry. In cases challenging affirmative action programs, she would recite the data that showed the persistence of racial inequity in housing, education and employment, the lingering effects of "centuries of law-sanctioned inequality." She prefigured today's debate about systemic discrimination.

Ginsburg brought her own experiences to bear, insisting that legal rules be understood in "the realities of the workplace," a reality she understood well. When a Supreme Court majority rejected Lilly Ledbetter's pay discrimination claim because she had sued too late, Ginsburg dissented, teaching her colleagues about how pay discrimination, unlike discrimination in promotions or hiring, was hidden from view; Ledbetter sued as soon as she found out about it. Goodwin Liu, a justice on the California Supreme Court and a former Ginsburg clerk, has said that when Ginsburg was recounting Ledbetter's story, she was also telling her own.

Ginsburg was a reluctant dissenter, concerned about the moral weight of a decision when the court did not speak in a single voice. But in recent years, her role changed with the court's shifting membership. She dissented more and more -- when the majority gutted the Voting Rights Act or enabled businesses to opt out of contraceptive coverage for employees based on a broad religion-based exemption. She dissented when the majority spoke paternalistically about women who felt compelled to end a pregnancy in the second trimester.

In 2013, years after that conference at which I first heard her speak, I gave the Ruth Bader Ginsburg address at the New York City Bar Association. The justice introduced me, with an unforgettable sense of humor and warmth. Afterward, she sent me a gift, not a fancy academic treatise, but a signed book of her late husband's recipes, with a moving note. If I published my talk, she wanted to make certain that I included the story about Sadie, my mother. That story? Even though I had graduated from Yale Law School, Sadie wanted me to take the Triborough Bridge toll taker's test -- just in case!

Gertner, a senior lecturer at Harvard Law School and visiting lecturer at Yale Law School, is a retired U.S. District Court judge. She is the editor of "Representative and Dissenting Opinions of Justice Ruth Bader Ginsburg," to be published in December.