Harris claims her place in history 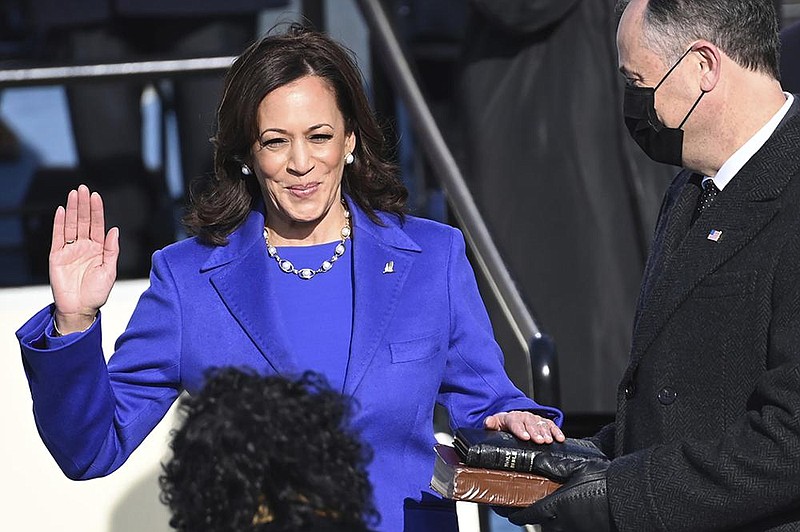 WASHINGTON -- Kamala Harris was sworn in as vice president of the United States on Wednesday, becoming the highest-ranking female politician in American history.

As the world watched, Harris raised her right hand.

Then, as Justice Sonia Sotomayor read "so help me God," her stoicism broke.

"So help me God," Harris repeated, overcome with a smile as her sister, Maya, broke into tears nearby. She hugged her husband. She found President-elect Joe Biden waiting, shaking his fists in triumph. Then she walked back to her seat and into history.

The moment reflected a historic rise at a time of historic crises. Harris, the 56-year-old daughter of a Jamaican father and Indian mother, became the first Black person and the first person of South Asian descent to hold an office that has been previously occupied solely by white men.

[Video not showing up above? Click here to watch » https://www.youtube.com/watch?v=3xUiTg-B0fk]

She was sworn in by Sotomayor, the first Hispanic person to serve on the nation's highest court, a calculated choice from Harris, a former senator from California who has highlighted minority-group women during her career.

From the moment Harris stepped out of her motorcade, she and her husband, Doug Emhoff, were escorted by Eugene Goodman, the Black Capitol police officer who held off a mob of rioters during the attempted siege of the Capitol complex Jan. 6. Goodman also escorted her to the balcony where she took the oath.

She was surrounded by a crowd that included allies such as Hillary Clinton and recent adversaries, including Supreme Court Justice Brett Kavanaugh, the subject of one of her interrogations on the Senate Judiciary Committee.

Harris, wearing a suit of purple designed by Black designers John Rogers and Sergio Hudson, took the oath of office on two Bibles. One belonged to civil-rights icon Thurgood Marshall, the first Black Supreme Court justice and a fellow Howard University graduate whom Harris, a former prosecutor, saw as a hero. The second belonged to Regina Shelton, a neighbor who was a second mother to Harris and her younger sister, Maya.

Earlier in the day, Harris and Emhoff joined Biden and his wife, Jill; Senate Majority Leader Mitch McConnell; Speaker of the House Nancy Pelosi; and others at St. Matthew of the Apostle church for a prayer service. They joined the Bidens in a motorcade to the Capitol, where Harris was sworn in shortly before the new president.

To celebrate the occasion, the Alpha Kappa Alpha sorority, the nation's oldest sorority for Black women, which Harris joined at Howard University, declared Wednesday as Soror Kamala D. Harris Day. Members of the sorority watching the celebrations across the country wore pearls, as did Harris, and the sorority's pink and green colors.

"There is a pride I can't put into words," said Elizabeth Shelby, a member of the sorority's Alpha Psi chapter, who watched from her home in Nashville, Tenn. "It is such a joy to see her rise to this place in our country. It is such a joy to know that she is one of us, that she represents us."

In India, residents of a tiny village surrounded by rice paddies flocked to a Hindu temple, setting off firecrackers and praying after they watched Harris, who has strong roots to the village, take her oath of office.

Groups of women in bright saris and men wearing white dhoti pants watched the inauguration live as reporters broadcast the villager's celebrations to millions of Indians. The villagers chanted "Long live Kamala Harris" while holding portraits of her and set off fireworks the moment she took the oath.

Earlier, the villagers adorned their temple with flowers, offering special prayers for Harris' success. Her maternal grandfather was born in the village of Thulasendrapuram, about 215 miles from the southern coastal city of Chennai.

"We are feeling very proud that an Indian is being elected as the vice president of America," said teacher Anukampa Madhavasimhan.

Harris' term, historic from the moment she finished the oath, has the potential to be one of the most consequential vice presidencies in American history. Democrats and Republicans each hold 50 seats in the U.S. Senate, and as the president of the Senate, Harris holds the tie-breaking vote.

The Democratic lean means the Biden-Harris administration has a clearer path to enacting legislative priorities, including an expansion of federal health care subsidies, a comprehensive immigration overhaul and a tax increase on the wealthy.

"For the Biden-Harris agenda, she will be in Congress very, very often or reaching out to senators very often to try to push that agenda through," Booker said.

An aide to Harris said she had already begun reaching out to other senators about White House nominations, including that of retired Gen. Lloyd Austin III to be secretary of defense.

One of Harris' first official acts was to show former Vice President Mike Pence and his wife, Karen, to the motorcade that would carry them away from the Capitol and signal the transfer of power to the Biden administration. Normally, the new president walks the former president into retirement. But because President Donald Trump did not attend the inauguration, Harris and her husband walked the Pences down the steps.

Later, Harris swore in three new Democratic senators: Alex Padilla, her replacement, who is from California and is the first Hispanic to hold the position; and Georgia's Raphael Warnock and Jon Ossoff, whose victories in a pair of runoffs tied the chamber. At 33, Ossoff will be the youngest senator sworn in since Biden, who was 30 when he first took office in 1973.

At 78, Biden is the oldest president in the nation's history, which thrusts additional importance on the person who would serve in his stead.

Aides to Biden and Harris say they have worked in tandem throughout the transition. Both say Harris will be a key partner in Biden's administration, much as Biden was to President Barack Obama. Harris often spoke alongside Biden at transition events, a constant presence by design in a way past vice presidents have not been.

Harris will bring to her history-making role at the White House an array of skills that Biden will draw on, including the prosecutorial chops that she displayed in Senate Judiciary Committee hearings, her personal energy that balances Biden's low-key approach and the voice she will offer to women and people of color.

"She'll bring a justice lens, a racial justice lens, racial equity, to everything and every policy and every decision that's going to be made," said Rep. Barbara Lee, D-Calif., a longtime ally of Harris. "That's so important, to have a Black woman, a South Asian woman's perspective, on the big issues that this administration has to tackle."

Current and former aides to Biden and Harris say that while dealing with the Senate will be important to her job, she has not been assigned a specific issue portfolio, at least at the outset, and will instead serve as a governing partner to Biden on all of his top priorities. If fulfilled, that mandate could make her among the most influential vice presidents in history.

In one sign of how much she may be involved in legislative campaigns, Harris has been in touch with mayors around the country to preview Biden's coronavirus relief package, the Biden aide said.

One early task for Harris will be ramping up her national security expertise. Aides say she will support Biden's broader agenda of reengaging with allies, dealing with the challenges China presents and combating climate change. But she is likely to pay particular interest to certain issues, including global health and democracy, and human rights. Harris also has a strong interest in cybersecurity, informed by her service on the Senate's Intelligence and Homeland Security Committees.

Biden has suggested that he sees himself as a "bridge" to the next generation of leaders -- and many Democrats expect that Harris will be a part of that next generation. If Biden does not run again, Harris almost certainly would be considered the early Democratic front-runner for 2024.

Information for this article was contributed by Chelsea Janes and Cleve A. Wootson of The Washington Post; by Rishi Lekhi, Aijaz Rahi, Kathleen Ronayne, Alexandra Jaffe and Christine Fernando of The Associated Press; and by Michael Crowley and Katie Glueck of The New York Times. 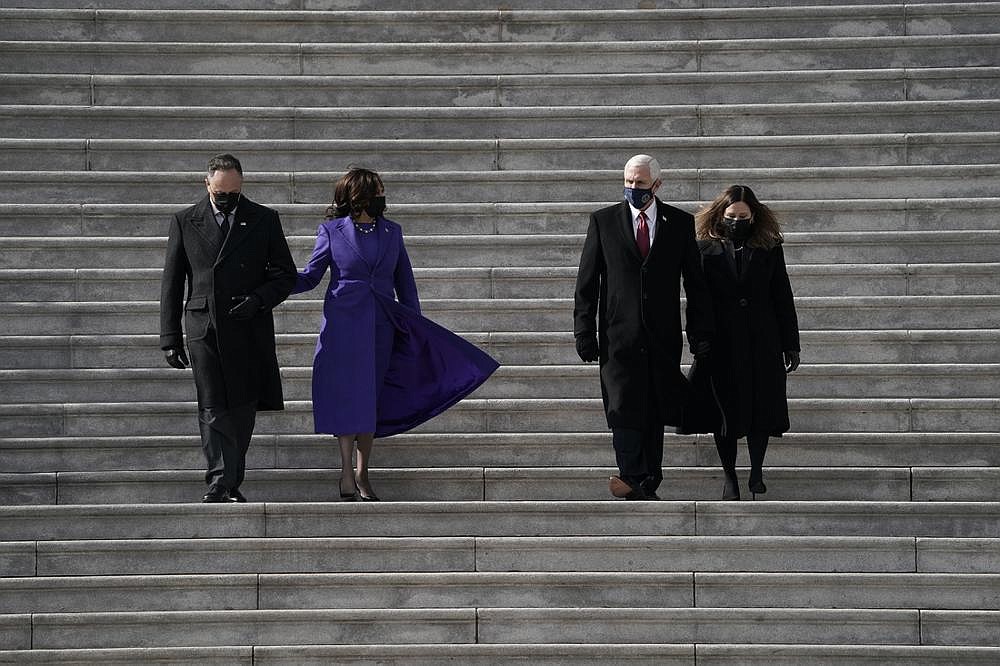 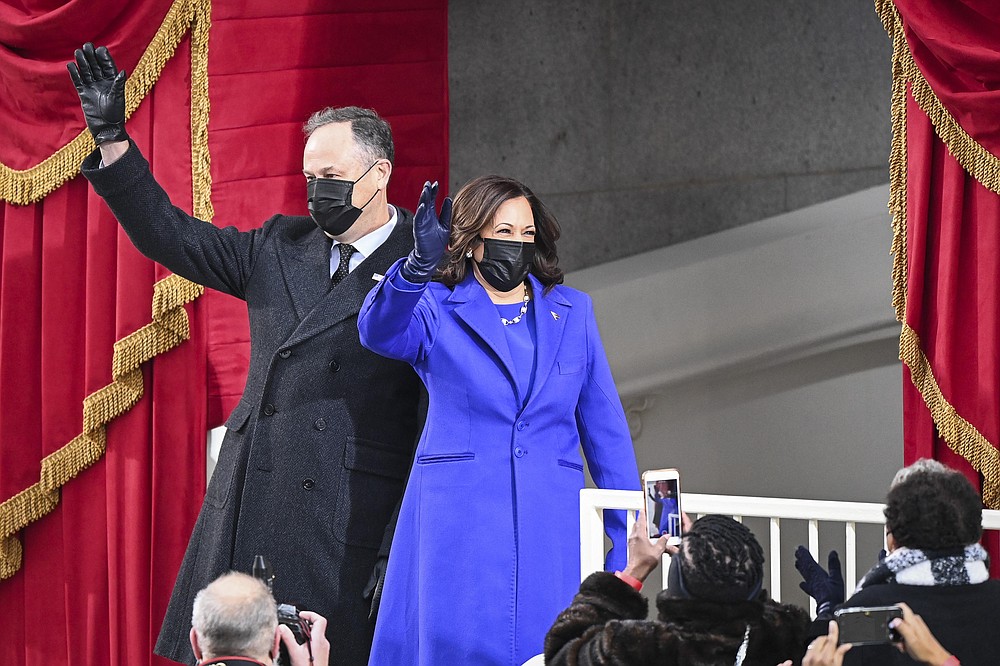 Vice President-elect Kamala D. Harris and Doug Emhoff arrive before Joe Biden is sworn in as 46th President of the United States. (The Washington Post/Jonathan Newton) 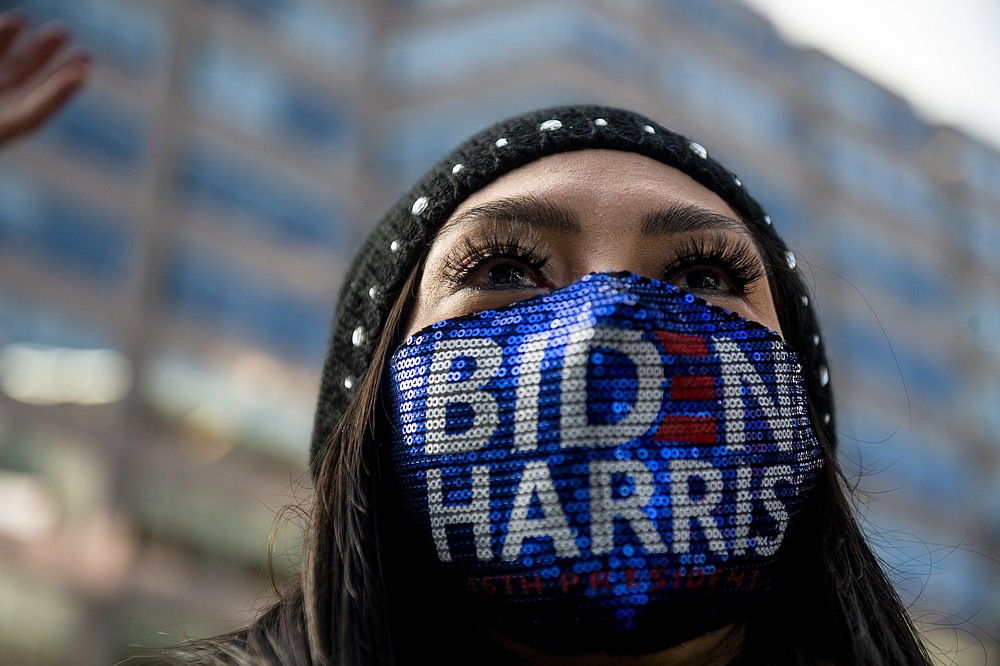 Yessica Leon, 33, of Tennessee tears up in Washington as Joe Biden's motorcade passes by before he is sworn in as the 46th president of the United States on Wednesday, Jan. 20, 2021. (The Washington Post/Amanda Voisard) 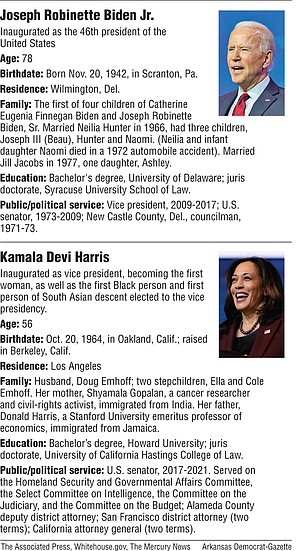