Hospitals are full as state's covid cases rise by 980 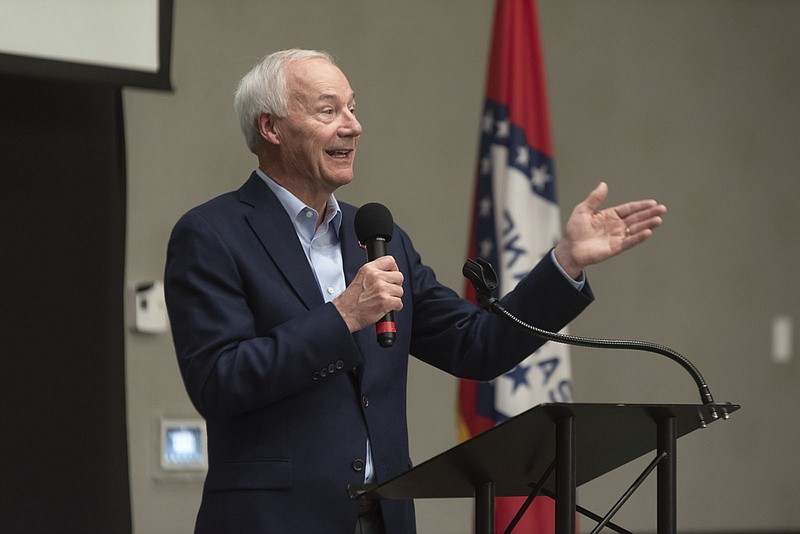 Top health officials in Arkansas warned Thursday of an approaching threat to patients' access to care as the number of coronavirus patients in hospitals rose by double-digits for the 10th day in a row.

"Hospitals are all full right now, and cases are doubling about every 10 days," University of Arkansas for Medical Sciences Chancellor Cam Patterson, a cardiologist, said on Twitter.

"If that trend continues, there will be significant challenges in providing care for both COVID and non-COVID [patients] over the next 2 weeks."

Already at its highest level since Feb. 14, the number of covid-19 patients in the state's hospitals rose by 22, to 669.

The number in intensive care rose by three, to 248.

The death toll from the virus, as tracked by the Arkansas Department of Health, rose by four, to 5,981.

Meanwhile, the state count of cases rose by 980.

While larger than any of the daily new case totals from mid-February through early last week, it was the first case increase in five days that was smaller than the increase on the same day a week earlier.

State Epidemiologist Jennifer Dillaha said the speed at which the virus is spreading in the state remains concerning.

She and other health officials have blamed the surge on Arkansas' low vaccination rate and the highly transmissible delta variant that first emerged in India.

"I don't really have hope that the numbers are going to turn around until we have a much higher proportion of the people in Arkansas vaccinated," Dillaha said.

"The delta variant is just much too contagious to stop on its own."

Arkansas Surgeon General Greg Bledsoe, an emergency room physician and candidate for the Republican nomination for lieutenant governor, said he's more worried about the situation facing state hospitals now than he was in January, when the number of hospitalized patients peaked at more than 1,300.

The group, which includes Patterson, met via videoconference Thursday to discuss the growing volume of covid-19 patients and ways of encouraging vaccinations.

He said hospitals have a high number of patients with covid-19 as well as other types of patients, making it difficult to transfer patients from one hospital to another.

"It's very problematic if you're in a smaller community and you need a cardiologist, a heart doctor if you're having a heart attack, or if you've been hit by a car and you need to be transferred somewhere for trauma," he said. "We're starting to have problems finding beds for those patients."

If the number of covid-19 patients keeps growing, he said it could affect access to care for all types of patients.

"What I think in the very short term might happen is that we don't have beds for people who are coming in -- not just covid patients but all patients," Bledsoe said.

"That's the biggest, most frightening scenario that we all have."

The increase in cases Thursday followed spikes of 1,476 Tuesday and 1,309 Wednesday.

After rising above 1,000 as of Wednesday for the first time since February, the average number of cases added to the state's tallies each day over a rolling seven-day period fell to 990.

With new cases outpacing recoveries, however, the number of cases in the state that were considered active rose by 275, to 9,079, the first time since Feb. 16 the number had topped 9,000.

Dillaha said 13.3% of the state's coronavirus tests were positive over a rolling seven-day period as of Wednesday, down slightly from the 14.2% that was initially reported for the week ending Tuesday.

Based on the numbers as of Wednesday, U.S. Centers for Disease Control and Prevention rankings on Thursday showed Arkansas as the state with the largest number of new cases per capita over a rolling seven-day period for the third day in a row.

Arkansas also continued to have the second-largest number of new covid-19 deaths per capita, with its 44 deaths during the week amounting to a rate of 1.5 per 100,000 residents.

During Arkansas' winter covid-19 surge, Bledsoe said the overall volume of patients going into emergency rooms was lower than it had been a year earlier.

In addition, he said the public is "tired of hearing about covid."

He said he's been trying to sound the alarm on Twitter, in television interviews and private conversations.

"It makes me very concerned, but the biggest emotion I have is sadness, honestly, because I know there are people walking around that are going to be harmed by this," Bledsoe said.

"In a weird way, it's like watching a slow-motion car crash and, you're telling people, 'Please, please.' And they're not listening, and sometimes they're attacking you."

In a statement Thursday urging Arkansans to get vaccinated, Arkansas Children's Hospital Chief Executive Officer Marcy Doderer said all of the hospital's covid-19 patients who have been discharged this month were unvaccinated, "even though some were eligible for the vaccination."

"Oftentimes, children contract covid-19 from unvaccinated peers and adults who do not exhibit symptoms," Doderer said.

"We fully anticipate seeing more kids get sick with the delta variant of covid-19 because it spreads more easily than earlier strains and because kids under 12 are not yet eligible to be vaccinated."

Of the three vaccines that have been authorized for use in the United States, Pfizer's is allowed for people as young as 12, while the ones from Johnson & Johnson and Moderna are cleared only for people 18 and older.

As of Thursday, the children's hospital in Little Rock had 10 covid-19 patients, including two who were on ventilators, spokeswoman Hilary DeMillo said.

Arkansas Children's Northwest in Springdale didn't have any covid-19 patients, she said.

At the Northwest Arkansas Council's annual meeting in Fayetteville on Thursday, Hutchinson said he's learned in his "community covid conversations" meetings around the state that "the opposition to vaccination is not just casual, but it is organized and is truly at the conspiracy level."

At the first of these meetings, last week in Cabot, he said someone showed him an email from an organized group that said the governor "is going around for his mass vaccination clinics" and suggested "you should not call them vaccines, you should call them bio-weapons."

Hutchinson told the business group that he and his team are being confronted with not only the terminology these groups are using but also with conspiracy theories that range "from mind control and on down the line."

In one sign that the state's vaccinations are picking up, the number of Arkansans who had received at least one vaccine dose increased by an average of almost 3,300 a day during the week ending Thursday, according to CDC data.

That was the highest average over a seven-day period since the week ending June 1.

"Hopefully, people are gaining confidence in the vaccines and realizing that the risk of becoming ill with covid-19 is much greater than the risk of getting vaccinated," Dillaha said.

Health Department figures also showed an uptick in the total doses administered each day, including second doses of the Pfizer and Moderna vaccines, following a slowdown over the Fourth of July weekend.

At 5,624, Thursday's increase was over 100 more than the increase a week earlier.

The average number of doses administered each day over a rolling seven-day period rose to just over 4,900.

That was still down from an average of more than 5,700 a day just before the holiday weekend, however.

According to the CDC, the number of Arkansans who had received at least one vaccine dose rose Thursday by 4,296, to 1,309,002, representing about 43.4% of the state's population.

Among the states and District of Columbia, Arkansas continued to rank 45th in the percentage of its residents who had received at least one vaccine dose and 49th, ahead of only Mississippi and Alabama, in the percentage who had been fully vaccinated.

Nationally, 55.8% of people had received at least one dose, and 48.3% were fully vaccinated.

Pulaski County had the most new cases Thursday, 151, followed by Faulkner County with 75, and Benton County with 61.

The McPherson Unit near Newport and the Central Arkansas Community Correction Center in Little Rock each had one new case.

The Omega center had a total of 23 active cases as of Thursday, Murphy said.

The Little Rock lockup had two active cases, and the McPherson Unit had one.

Statewide, the number of people who have ever been hospitalized with confirmed covid-19 infections rose by 26, to 17,573.

The number who have ever been on ventilators with covid-19 rose by four, to 1,785.