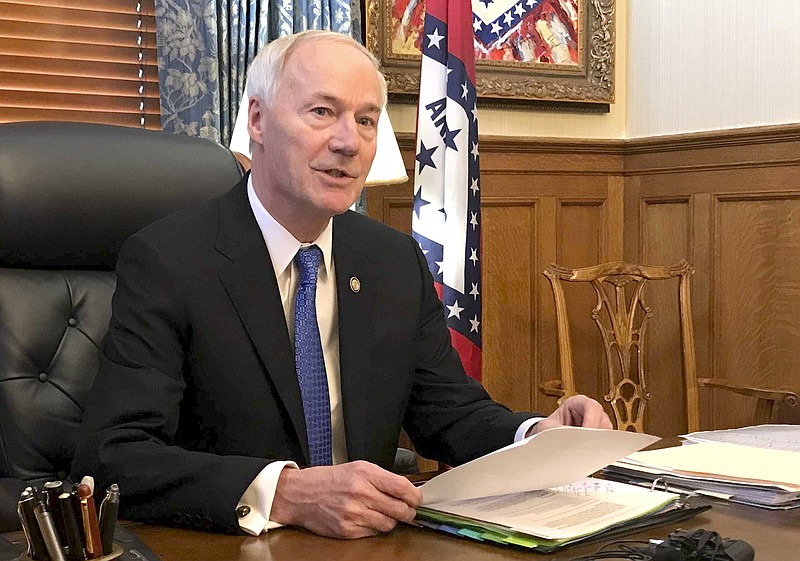 This is a test caption. Asa Hutchinson is shown in this file photo.

Gov. Asa Hutchinson recently released a proposal to drop the state's top individual income-tax rate from 5.9% to 5.5% over two years.

What exactly does the proposal suggest?

For Arkansans making between $22,900 and $82,000 a year, the top rate currently applies to income above $38,500, said Scott Hardin, a spokesman for the state finance department. Income below that amount is taxed at lower rates.

For Arkansans making above $82,000 a year, the top rate is paid on income above $8,300, he said, with the portion of income below that amount taxed at lower rates.

The rate reduction would affect about 580,000 taxpayers, more than one-third of the Arkansans who file individual income tax returns annually, Hardin said.

What effect would the cut have on state revenue?

The proposal is projected by the finance department to reduce state general tax revenue by about $30 million in fiscal year 2022, for which the state passed a $5.84 billion budget earlier this year. The fiscal year starts July 1.

The total impact would be $115 million in fiscal 2024, the governor said in a written statement.

What do legislators want to do about tax cuts?

However, he said it's too early to say how much the state can afford in income-tax cuts. Senate Revenue and Taxation Committee Chairman Bill Sample, R-Hot Springs expressed similar concerns, especially about how state finances would look after federal stimulus money runs out.

Senate Democratic leader Keith Ingram of West Memphis said he would like to review "a mixture" of cutting the top rate and another lawmaker’s proposal to eliminate the low-income tax table.

The governor said he plans to work with legislators over the next few months to create a proposal they’re interested in before calling a special session this fall during which the General Assembly would formally consider tax cuts.