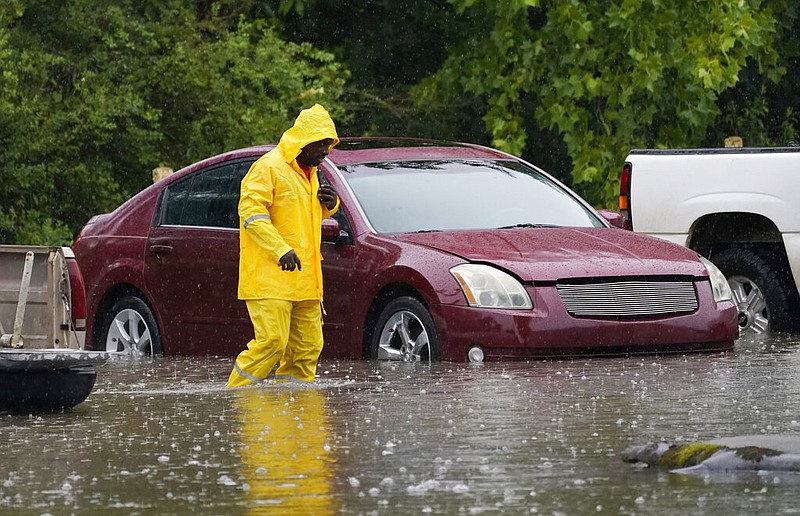 An employee at a used auto dealership in Lexington, Miss., treads water as he checks on vehicles Thursday, June 10, 2021. The dealership was moving cars out of the rising waters after two days of heavy rain in the region. (AP/Rogelio V. Solis)

Flash flooding started Tuesday but became especially hazardous Thursday when the Canal 19 reservoir southeast of Dumas filled to capacity and overflowed, city street superintendent Shelby Slater said. Water flows southeast from between Pine Bluff and Grady, and continues until it reaches the Mississippi River, the eastern border of Desha County.

"It's a low area, and when vehicles go down the street, they flood water on some of the houses," Slater said. "We've got barricades up trying to close [roads] off so there's no entry."

The Arkansas Division of Emergency Management sent a sandbagging machine to Dumas to aid efforts to barricade the floodwaters, according to a tweet from the department.

"Because the water came so fast, we didn't have sandbags on hand, so there was a period of an hour or two before we could even get the sand," Dumas Mayor Flora Simon said. "We'll probably keep some on hand more than we normally do for a length of time."

Road closures and power outages between Little Rock and the Mississippi River, south of Interstate 40, affected roughly 50 homes, as estimated by the American Red Cross in a news release. The organization set up a flooding-assistance hotline at (417) 447-7180 that will be active 10 a.m. to 6 p.m. from today to Thursday.

The Red Cross opened a shelter at Marzell Missionary Baptist Church in Gould earlier this week to aid people affected by the flooding.

Gov. Asa Hutchinson declared a state of emergency and is to tour Desha County by helicopter today, according to news releases from his office. The Division of Emergency Management will use $100,000 from the Emergency Response Fund of the Governor's Disaster Fund to help the community recover.

Some Dumas residents evacuated their water-damaged homes and went to stay with relatives, Simon said. City officials did not know how many homes and businesses had been damaged as of Thursday afternoon, but Slater said the city was working to tally the number of people affected and make sure they have access to necessities, such as groceries and medicine.

Slater and the 12 other street division employees have been collecting debris, such as damaged carpet, that people have been leaving outside their homes and businesses, he said.

"There's not much we can do," Slater said. "We can only hope and pray that the water recedes."

Farmers are hoping for the same thing since the water covering several fields has nowhere to go, said John Farabough, chief agricultural officer at the University of Arkansas Extension office in Desha County.

Some fields are under water, ruining crops of rice, corn and cotton throughout northeastern and central Desha County, he said.

Forecasts call for more rain in coming days, so it's difficult to know how long the fields will remain saturated, Farabough said, but the impact will be worse the longer the water stays in place.

"I would say our crop looked to be one of the best crops in five years," Farabough said. "A lot of farmers had very great hopes for this year -- record prices and markets -- and now this devastation hits."