Doses expiring in June at risk of being tossed 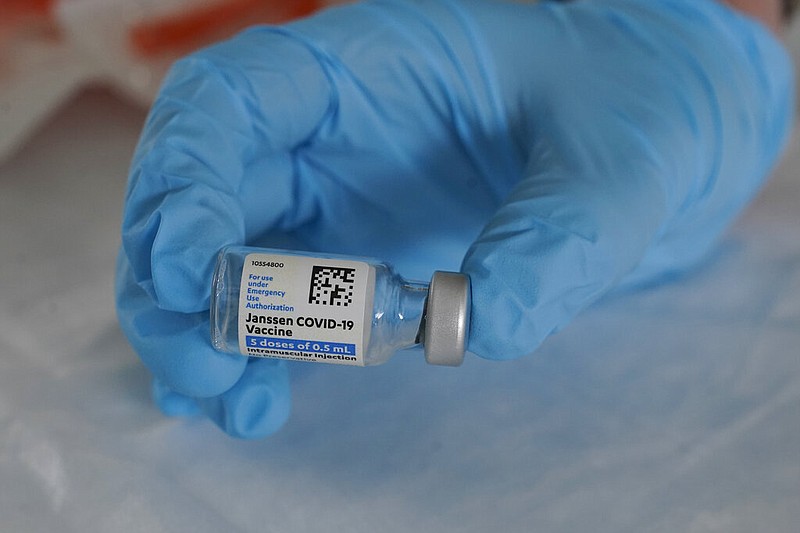 With demand for the coronavirus vaccine in Arkansas continuing to wane, the state's efforts to avoid wasting doses will face a challenge next month, when almost 60,000 doses of the single-shot Johnson & Johnson vaccine are set to expire.

According to information provided by the state Department of Health on Friday, more than 85% of the state's inventory of Johnson & Johnson as of Thursday had expiration dates coming up in June.

Using all 59,755 doses before those dates would require a significant acceleration of vaccinations.

The Johnson & Johnson doses that have been administered so far include 11,150 that were given May 1 through Friday -- an average of fewer than 400 per day, according to data from the U.S. Centers for Disease Control and Prevention.

Using up all the Johnson & Johnson doses set to expire in June would require almost doubling the number administered since the first ones arrived in early March.

Still, state Epidemiologist Jennifer Dillaha said she expects Arkansas to be able to use most of the vaccine doses before they expire.

"What we have done is move them around so that the earlier expiring doses get used," Dillaha said. "We will continue to do that."

Arkansas doesn't have any plans to send doses to other states, she added.

"States everywhere are in a similar situation where they're not ordering doses," Dillaha said. "They're using up what they have."

The slowdown in vaccinations over the past several weeks has coincided with a plateau in daily case increases, hospitalizations and deaths.

On Friday, the count of state cases rose by 214, a slightly larger increase than the one the previous Friday, while the number of people hospitalized with covid-19 fell slightly.

The state death toll from the virus, as tracked by the Health Department, rose by one, to 5,830.

"With over 2 million doses of the COVID-19 vaccine administered, we've made great progress toward our goal," Gov. Asa Hutchinson said in a tweet.

"Our case numbers continue to remain steady, but we will see these numbers decline with an increase in vaccinations. Please do your part to help your community."

Last month, Arkansas began drastically cutting back on its vaccine orders from the federal government as unused doses piled up at pharmacies and hospitals.

Instead of ordering new doses, the state has focused on coordinating the transfer of doses among providers.

With the help of the Arkansas National Guard, the state moved about 25,000 doses around this month, Dillaha said.

Despite those efforts, the state this month lost its first doses to expiration: 541 of Johnson & Johnson and 79 of Moderna.

An additional 2,205 Pfizer doses that were set to expire Monday hadn't been used as of Thursday.

Compared with the Johnson & Johnson vaccine, however, Arkansas has received far more doses of the two-shot Pfizer and Moderna vaccines and has been using them at a faster rate.

The agency's figures include doses administered through federal programs and entities outside of the vaccination program managed by the state.

After June, the remaining 10,051 Johnson & Johnson doses are set to expire in July.

The exact dates within each month the doses are set to expire weren't available Friday.

In addition to being in shorter supply, the Johnson & Johnson vaccine has a shorter shelf life than the other two.

It can be kept in the refrigerator about four months, Dillaha said.

The vaccine developed by Pfizer and BioNTech can be kept at ultralow temperatures for up to six months.

Moderna's vaccine, which can be stored in a normal freezer, originally also had a six-month shelf life, but that was recently extended to seven months, Dillaha said.

Shipments of the Johnson & Johnson vaccine have been halted for weeks after a manufacturing error at a plant in Baltimore caused millions of doses to be discarded and production to be stopped while the U.S. Food and Drug Administration investigates the matter.

At the University of Arkansas for Medical Sciences, "several hundred doses" of Johnson & Johnson are set to expire in mid-June, spokeswoman Leslie Taylor said in an email.

"We have transferred some doses to other providers," Taylor said. "We are also trying to increase the number of community vaccination events we are doing and are working with providers to increase their awareness to help them identify patients eligible for the vaccine."

She said the university has reported its "near expiration dates and quantities" to the Health Department.

It's possible some doses will expire, but the university is "optimistic that we will find opportunities to share the doses or administer them before they do," Taylor said.

The university has 2,000 doses of Johnson & Johnson and 13,000 Pfizer doses, she said. None of its doses have expired so far, she said.

Dillaha said providers must discard expired doses "the way they would other biologic products."

In addition to doses that reached the end of their shelf life, she said 1,227 coronavirus vaccine doses have been wasted after they were removed from a freezer and not used within the authorized amount of time.

For instance, until earlier this month, the FDA required Pfizer vials that had been moved to a refrigerator to be used within five days. On May 19, the time the vaccine could be kept in a refrigerator was extended to 31 days.

In addition, 13,569 doses in Arkansas had been discarded as of this week after they were left unused in a vial or syringe, up from 4,456 late last month.

Health Department figures on Friday indicated that the pace of vaccinations in the state was continuing to slow.

It reported that the cumulative number of doses that had been administered, including second doses of the Pfizer and Moderna vaccines, rose by 9,910 -- the third daily increase in a row that was smaller than the one a week earlier.

The average number of doses administered each day over a rolling seven-day period fell to fewer than 7,300, its lowest level since the week that ended Feb. 22.

According to the CDC, the number of Arkansans who had received at least one vaccine dose rose by 4,074, to 1,183,172, representing about 39.2% of the state population.

Nationally, 50.1% of people had received at least one vaccine dose and 40.2% were fully vaccinated.

Meanwhile, a final covid-19 schools report for the semester showed an uptick in active cases since Monday.

With school having ended for most students this week, the report Thursday from the Health Department also perhaps lists final infection totals for students and staff members.

"Following yesterday's report, no decisions have been made regarding next steps for the school reports," Danyelle McNeill, a Health Department spokeswoman, said Friday in an email.

Active cases increased to 241 from 217 in public school districts statewide, according to Health Department reports issued Thursday and Monday.

For public school district staff members, the total over the same time period was 11,994.

Schools have provided data to the Health Department, but individual school districts often reported different infection totals on their websites.

McNeill has said that districts have done "an excellent job of verbally reporting cases" to the Health Department but that "different reporting and analysis methodologies" resulted in "variations" on case counts depending on the source.

Since June 15, the Springdale School District topped all other districts with a cumulative total of 2,280 cases. This total includes 1,678 identified student cases and 411 staff cases.

The Springdale School District is the state's largest by enrollment, with 22,614 students, according to the state Department of Education.

Private schools in the state had a cumulative total of 2,406 cases since June 15, including 1,643 student cases and 649 staff cases, according to the Thursday report.

Since June 15, colleges and universities have had a total 14,567 coronavirus cases, including 10,604 student cases and 1,930 faculty and staff cases.

The University of Arkansas, Fayetteville had 3,807 cumulative cases since June 15, including 2,890 student cases and 282 faculty and staff cases.

Similar to school districts, colleges have reported differing case totals compared with the Health Department. UA this past fall enrolled more than 27,500 students, according to state data.

After rising by 14 on Thursday, the number of patients hospitalized with the virus fell Friday by two, to 201.

The number of those patients on ventilators, however, rose by two, to 33.

Friday's increase in cases was slightly smaller than the one on Thursday but larger by 13 than the one a week earlier.

After falling the previous two days, the average daily increase in the state case count over a rolling seven-day period rose by about two, to 181.

"I'm thinking that we're at kind of a steady state right now," Dillaha said. "We'll have to see what happens as a result of Memorial Day weekend."

She said she was concerned gatherings over the weekend will lead to an uptick in cases if people who aren't vaccinated don't wear masks and practice social distancing.

People with compromised immune systems or with health conditions placing them at greater risk of severe covid-19 should consider taking those precautions even if they have been vaccinated, she said.

The cases added in the state Friday included 122 that were confirmed through polymerase chain reaction, or PCR, tests.

The other 92 were "probable" cases, which include those identified through less-sensitive antigen tests.

The number of cases that were considered active rose by eight, to 2,016, as new cases outpaced recoveries.

The state death toll rose by one, to 4,626, among confirmed cases and remained at 1,204 among probable cases.

The number of state virus patients who have ever been on a ventilator remained at 1,661.