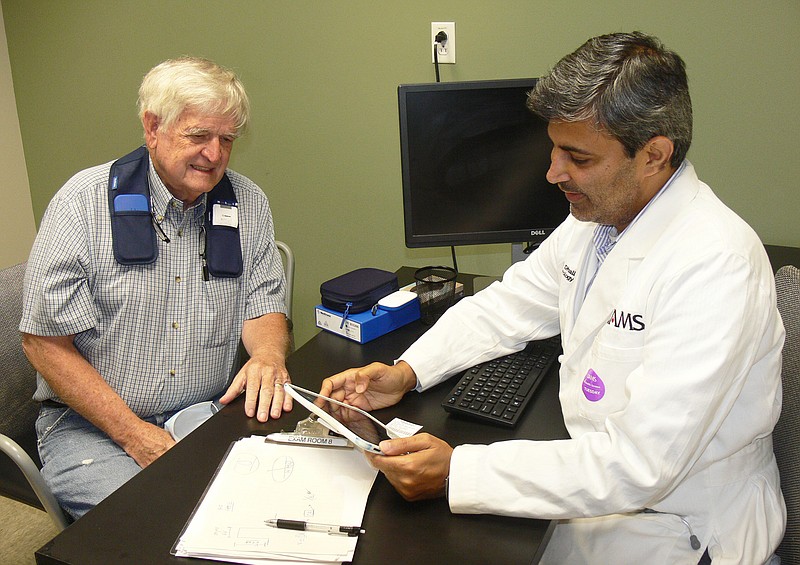 Jerry Butler (left) describes what he's feeling as Dr. Rohit Dhall (right) fine tunes impulses produced by a deep brain stimulation electronic tremor-control device implanted in Butler's brain at the UAMS Medical Center in June. Dhall is a professor of neurology and the director of Neurodegenerative Disorders at the University of Arkanas for Medical Sciences. (Special to the Democrat-Gazette/Jerry Butler)

During deep brain stimulation surgery to treat uncontrollable tremors, I was euphoric because my tremors went away. When the tremors gradually reappeared shortly afterward, the skill of a well-trained neurologist, a newly approved technology and a high-tech Irish medical company combined to make my shaking go away for good.

Dr. Erika Petersen, a neurosurgeon at the University of Arkansas for Medical Sciences, performed delicate brain surgery through a hole in my skull and implanted a device described as "a pacemaker for the brain."

During surgery, when she stimulated the nerves associated with my tremors, the effect on those nerves caused my trembling to stop. Steadiness in my hand lingered beyond surgery, but gradually I began shaking again.

Her colleague, neurologist Dr. Rohit Dhall, called the short time between brain surgery and the re-emergence of tremors a "honeymoon" that wouldn't last beyond a couple of weeks. When the honeymoon was over, my tremors came roaring back.

Even though I had been informed about the honeymoon, like a bride who discovers that her dreamy new husband won't lower the lid, I was filled with angst. Three weeks after brain surgery, I once again began to shake the Raisin Bran off my spoon at breakfast, and I could no longer floss my teeth -- tasks that I had done with ease immediately after deep brain stimulation.

I did know, intellectually, that my newly regained skills would lapse without a routine maintenance of appropriate electrical stimulation.

Bespectacled, the doctor has a scholarly look about him. He struck me as a particularly gifted listener. Not content just to acknowledge what I was saying, he also checked me with questions to make sure he knew what I meant. If I mentioned something in passing, he would bring me back to it to ensure he was not missing something important. When I looked up his research and journal articles, I realized that Dhall doesn't just have a scholarly look. He is a scholar.

My tremors would not be completely under the control of the electronic mechanism implanted in my brain until a battery and control device that had been surgically implanted just below the skin near my left breast were powered up.

The entire electronic-tremor control system could not be energized and adjusted until swelling caused by surgery had gone down. This took almost six weeks.

When the day came for Dhall to flip the switch on my battery to "ON" and quell my tremors, he did so as we were sitting face-to-face in a small office.

He first explained the basics of the technology and then showed me the parts that would be in use:

3) An iPad with an app that would allow Dhall to adjust settings in the other two devices.

When he synced the devices, they would control the stimulation in my brain and ultimately the tremors of my hand, wrist and arm.

"When I turn this on you may feel tingling," Dhall said. "Our objective today is to find an optimum setting, where you will get the utmost stability in your hands without any undesirable twitches or tingling in your hands, feet, face, or tremoring in your voice."

The session took about 45 minutes. It was almost as if the right side of my body was a puppet and Dhall a puppeteer. With invisible electronic signals he could cause me to tremble or to stop trembling, cause my face to twitch or become relaxed, control my gait while walking or my voice while speaking.

After making a setting he would ask me to perform some act such as holding my hand out or drawing a spiral. In some instances he would ask me what I felt and where on my body I felt it. Once or twice he asked me to sing a note and hold it like an opera singer.

He searched for the setting that provided optimal control of my tremoring without noticeable tingling or side effects. Dhall would eventually hit a "sweet spot," like the center of a tennis racquet, one that gives a player both control and power.

Since that appointment, my tremors have ceased.

However, Dhall tells me I may need to come in every few months or so to tweak the settings.

He says that, after a while, I may be able to turn my system off at nights while asleep so as to extend the battery life, which under normal operating conditions is six years. He is also hopeful I can discontinue the oral medications that I have taken to control my shaking and thus eliminate undesirable drug side effects.

I can scarcely imagine how the treatment of the essential tremors that I was afflicted with for three decades could have been resolved more completely.

The technique of simulating nerves in the brain with electrical impulses to control movement is more than 60 years old. The first patients who submitted themselves as candidates for the procedure and the first doctors to perform such surgeries were brave and daring pioneers.

From those beginnings, refinements have made the procedure safer and more effective.

These refinements and associated research have resulted in medical scientists' concluding that deep brain stimulation is an appropriate therapy for a wide range of neurologic maladies, including Parkinson's disease tremors, epilepsy, primary dystonia and treatment-resistant obsessive-compulsive disorder, in addition to essential tremors, which is what I had.

The technology implanted in my body is one of the newer versions of the electronic systems now in use — the SenSight Direction Lead System. According to a news release June 15, UAMS was one of the first hospitals in the nation to gain approval from the U.S. Food and Drug Administration for use of this system.

I understand that I was the third person in the state to receive this particular generation of technology. It was developed by Medtronic, an Ireland-based medical technology firm. Dhall tells me that Petersen, my neurosurgeon, aided in the research that helped test and refine the Medtronic system.

I like that it has a feature that keeps it from being "hacked" by bad actors with sophisticated computer skills.

Deep brain stimulation is a treatment option that I found scary. Getting such treatment, while the hospital is also dealing with a pandemic, made the process slower than it might be under normal circumstances. From the time I sought treatment until Dhall turned my device on was more than a year and a half. There is significant pain involved, and it is not without risk.

For me, an old man who was once so shaky, it was well worth it.

I can now eat peas and not have them fall from my fork. I can use a screwdriver with one hand. I can drive a nail with a hammer, sign my name legibly, scale a fish if I choose to do so, take a photograph of a bird in flight, hold my great-grandson without fear of dropping him and do so much more that I was unable to only three months ago. The quality of my life has taken a quantum leap.

Now, if I could just convince my brother that the electronics in my brain are not what is messing up the reception on his television.