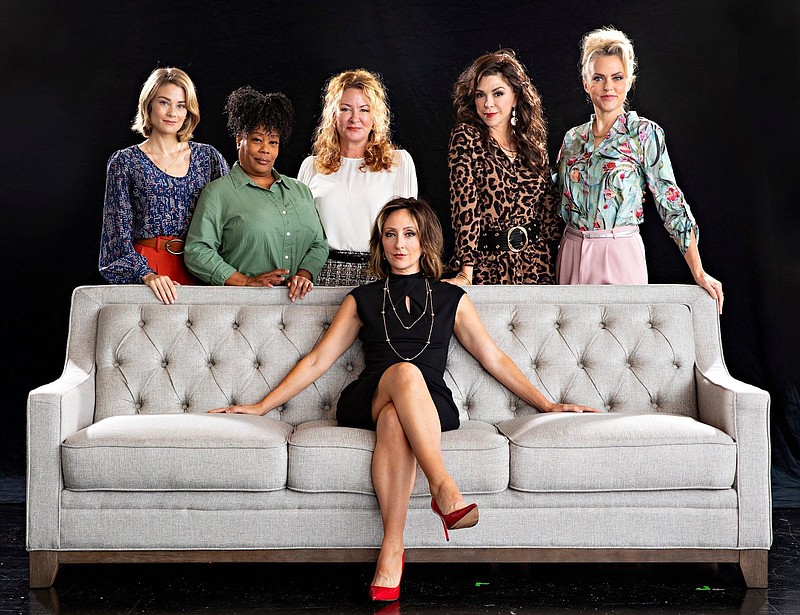 Nearly three decades after the last “Designing Women” episode aired on television, the world is getting a chance to hear what the Sugarbakers crew thinks about what’s happened in the intervening years. Linda Bloodworth-Thomason’s new script, mounted at TheatreSquared in Fayetteville under the direction of Harry Thomason, features Carmen Cusack (center) as Julia Sugarbaker; Kim Matula as Haley McPhee; Carla Renata as Cleo Bouvier; Sarah Colonna as Mary Jo Shively; Amy Pietz as Suzanne Sugarbaker; and Elaine Hendrix as Charlene Frazier. (Special to the Democrat-Gazette/Wesley Hitt for TheatreSquared)

TheatreSquared's newest production has a pretty amazing pedigree: The company has repurposed for the stage the iconic television show "Designing Women," which debuted in 1986 and garnered 18 Emmy Award nominations during its seven-year run. Original creators Linda Bloodworth-Thomason and Harry Thomason are along for the ride, with Bloodworth-Thomason writing the script and Thomason directing (and the theaters' co-founder and associate artistic director Amy Herzberg co-directing).

"We couldn't be more thrilled than to be collaborating with this storied Hollywood team, Linda and Harry, helping them usher their latest creation to the stage — and right here in Arkansas, where they have deep roots," says Artistic Director Robert Ford. "And how completely fun to premiere a witty comedy that's loaded with spot-on observations about the current scene."

The first episode of the series introduced four indomitable women to the world: Julia and Suzanne Sugarbaker, partners in an Atlanta design firm; Charlene Frazier, the firm's office manager; and Mary Jo Shively, its head designer. Immediately, the show asserted itself as one that would make social commentary the beating heart of its comedy. Toward the end of episode one, Julia unleashes a fiery tongue-lashing on a man in a restaurant who is trying to interrupt the women's conversation with a slimy pickup line: "There's no need for introductions, Ray Don, we know who you are," is the quotable sentence that begins her address, actress Dixie Carter's rage simmering just barely below the surface. Julia's eloquent, passionate rants — as well as the rest of Bloodworth-Thomason's whippet-quick dialogue, rife with zingers — would become a signature of the show as it tackled weighty social issues of the 1980s and early 1990s like AIDS discrimination, LGBTQ rights, misogyny and sexual harassment. 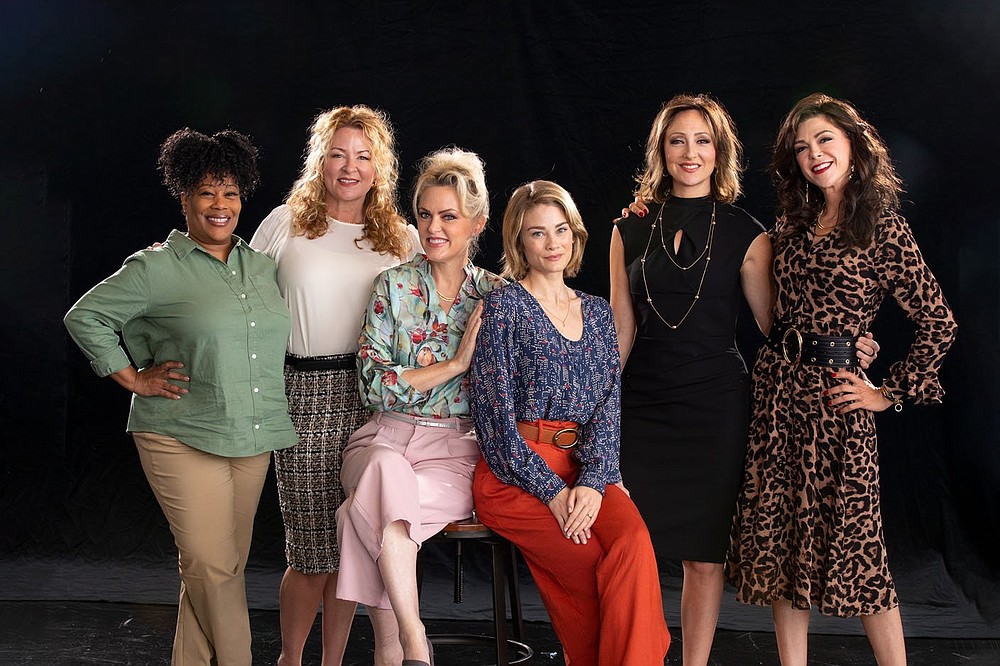 “It’s a great joy for TheatreSquared to continue its legacy of developing new work with this iconic premiere from Linda Bloodworth-Thomason,” says Dexter Singleton, the theater’s director of new play development. “This one is particularly exciting because for the first time it gives us the opportunity to bring a well-known television show to the stage, satisfying old fans while creating new ones.” (Special to the Democrat-Gazette/Wesley Hitt for TheatreSquared)

PUT THEM IN THE 21ST CENTURY

Bloodworth-Thomason's new script carries that legacy into the 21st century as the audience learns what the women at Sugarbakers think about of-the-moment social issues.

"What I really wanted to do was take those women as we last saw them and set them down right now," Bloodworth-Thomason told The New York Times when the show was announced. "They'll have the same history, be the same people, have the same attitudes, the same philosophies, but they'll be talking about #MeToo and the Kardashians and Donald Trump and all that's going on right now."

"'Designing Women' was written and created by a woman, and I don't think a lot of people pay homage to that — they may recognize it, but they don't really credit her with being one of the trailblazers in that regard," says actor Carla Renata, who plays Cleo, newly introduced in the play's script as a cousin to Anthony Bouvier, an original character on the television show. Renata was last seen on Broadway as Gary Coleman in "Avenue Q" and has worked on the national tours of "Smokey Joe's Cafe," "The Who's Tommy," "The Lion King" and "We Will Rock You." Currently, she's the creator and host of a popular podcast called "The Curvy Critic with Carla Renata." Her Cleo is a blunt, funny truth teller who is not afraid to address any elephants that might be hiding in the room.

"I feel like Cleo's sensibility and her personality is to carry on [her cousin, Anthony's] lineage within the confines of that world," Renata says. "Cleo is gay. She's married, she has a child — she represents what society is now. Back then, they were talking anti-gay, they were thinking that you could get AIDS from touching people — it was a very different world then. Now we live in a world where we see same sex couples, we see same sex marriages, we see the LGBTQ community fighting for their rights, just like everybody else has fought for their rights — women, Black people, indigenous people. She's a symbol of the social revolution that has taken place since the show premiered on television." 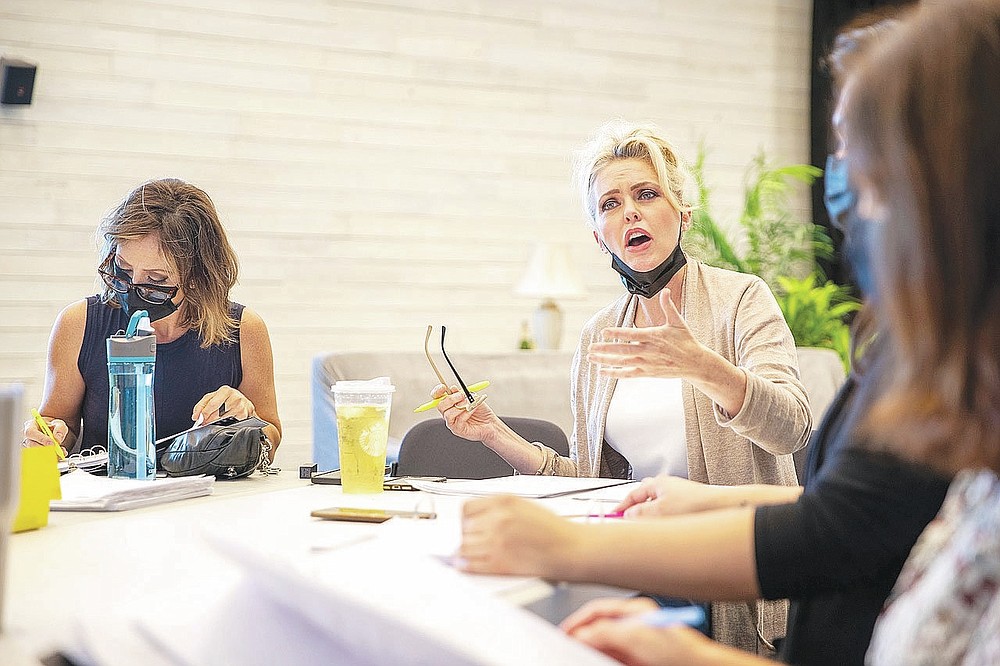 Native Southerner Elaine Hendrix, known for roles like Alexis Carrington in the recent reboot of “Dynasty” and Meredith Blake in “The Parent Trap,” discusses a script change during rehearsal for her portrayal of Charlene in the TheatreSquared premiere of “Designing Women.” (Special to the Democrat-Gazette/Wesley Hitt for TheatreSquared)

Watching the original show had an impact on her as a young woman, Renata says.

Sarah Colonna is a University of Arkansas graduate who cut her teeth in Hollywood as a stand-up comic and later went on to sit on the "Chelsea Lately" roundtable, appeared in the television shows "Insatiable" and "Shameless" and wrote two bestselling memoirs. She says the original show made an impression on her as well.

"They were showing clips of the last night at this [Designing Women Drag Dinner, a collaboration between Northwest Arkansas Equality, TheatreSquared and the Symphony of Northwest Arkansas,] of Julia's speech about AIDS, telling a woman off for [being homophobic], and, oh my God, everyone in the room was crying," Colonna says. "There's so much credit to be given to Linda and to Harry for being the first people to speak out about certain things on television."

Renata and Colonna are joined on stage by a slate of actors with equally impressive resumes — but more importantly, TheatreSquared and Thomason have cast actors who embody the spirit of these well-loved characters without resorting to imitation or caricature. Carmen Cusack, a musical theater legend, finds Julia Sugarbaker's wry imperiousness with ease (Katherine LaNasa will pick up the role for the second half of the run); Amy Pietz, veteran of television comedies like "Caroline in the City" and "Modern Family," delivers Suzanne's tart — usually misguided — social commentary with wide-eyed, self-centered precision; native Southerner Elaine Hendrix — who, in roles like Alexis Carrington in the recent reboot of "Dynasty" and Meredith Blake in "The Parent Trap," has no trouble showing her steely side — exudes warmth and humor in her portrayal of Charlene; and Colonna nails Mary Jo's tricky combination of witty sarcasm and empathy.

In addition to Cleo, a second new Sugarbakers employee is added to the mix — television and movie actress Kim Matula (credits include "Fighting With My Family," "UnREAL" and "The Bold and the Beautiful") is charmingly naive as Charlene's younger sister Haley, comically aghast at some of the topics of conversation in the office. R. Ward Duffy ("Blindspot," "Madame Secretary") plays a potential love interest for Julia, and Matthew Floyd Miller ("Call of the Wild," "Not About Nightingales") plays Suzanne's Trump-crazy ex-husband.

Colonna says the process of translating these popular characters from the television screen to the stage has been intimidating at times.

"I want to do it justice, I want to do Annie Potts justice, but I don't want to mimic her," she says. "It's a tricky line — I don't want to mimic an actress playing a role, I want to give homage to what she brought to the role. I think that's a big part that everyone feels a responsibility about — making sure that you don't see these characters and go, 'No, that doesn't add up or match up.' You want people to believe that we're playing these iconic characters that were on for so long."

Given the popularity of the original show, it's a good bet that many people will flock to this production, eager to see the characters they remember so fondly sound off on the current state of the world. The good news is the particular magic of the original show is present — the incisive social commentary, the quick, funny banter, and likable actors that have you rooting for them every step of the way.

In the end, Haley may just speak for "Designing Women" audiences when she says, "I just love the way y'all talk! And you have such colorful personalities. This is gonna be fun." 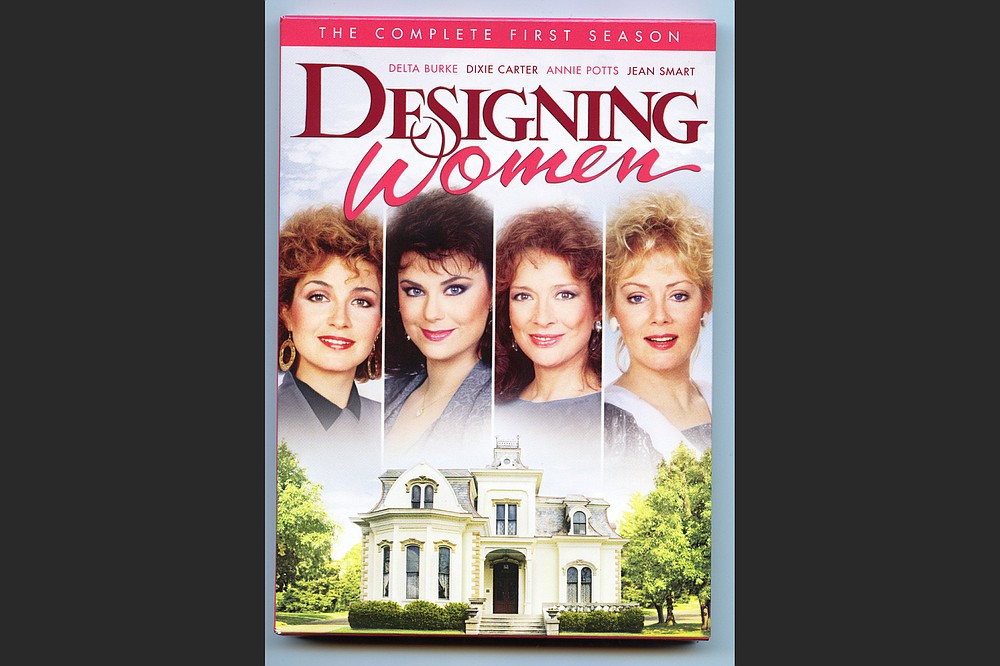 The cover of the first season DVD set for “Designing Women” shows Annie Potts, Delta Burke, Dixie Carter and Jean Smart, as well as Little Rock’s Villa Marre, 1321 Scott St. The house was pictured in the opening credits of the TV show as the home of the Sugarbakers. It was built in 1881 by Italian descendants Angelo and Jennie Marre. (Democrat-Gazette file photo)
‘Designing Women’

After it closes in Fayetteville, the production moves to the Arkansas Repertory Theatre in Little Rock for performances Jan. 18-Feb. 6.