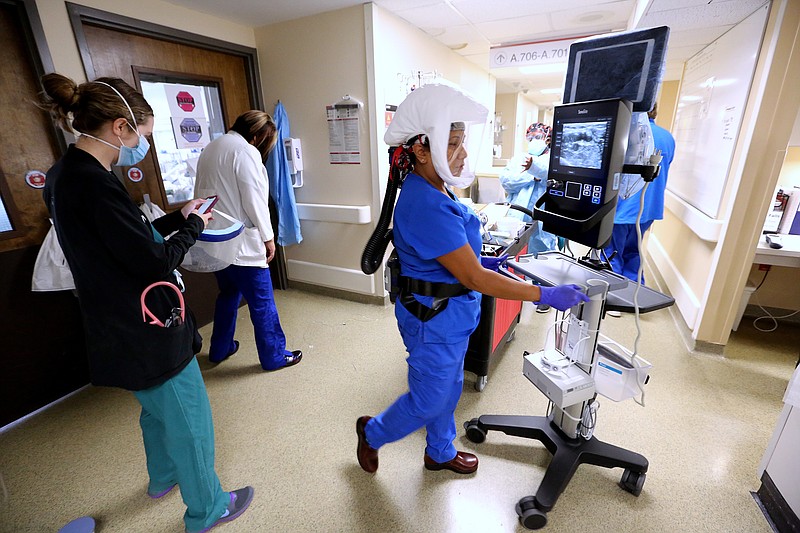 Arkansas' downward trend in new coronavirus cases and hospitalizations continued Thursday, with the number of people hospitalized with the virus falling for the ninth day in a row.

The numbers of virus patients who were on ventilators and in intensive care, however, both rose for the second straight day.

The state's death toll from the virus, as tracked by the Department of Health, rose by 33, to 7,395.

"While new cases are lower and hospitalizations are on the decline, we still are seeing too many deaths and an increasing number on ventilators," Gov. Asa Hutchinson said in a tweet.

"This shows the deadly nature of this virus. Don't take a risk; please get vaccinated."

It marked the longest stretch without a daily increase topping 2,000 since July 24, when the state reported more than 2,000 new cases in a single day for the first time since early February.

Since then, the state hadn't previously gone more than three days without a one-day increase of more than 2,000.

The number who were in intensive care rose by six, to 456.

The number of intensive care unit beds statewide that were unoccupied, however, rose by three, to 35, as a result of a reduction in non-covid-19 patients who were in intensive care.

Covid-19 patients made up about 41% of the people in intensive care Thursday, up from 40% a day earlier.

"I think perhaps there's not so many new people coming into the hospital, but the people in the hospital are staying and getting sicker," said Jennifer Dillaha, the Health Department's chief medical officer.

While the numbers of covid-19 patients in the state's hospitals, on ventilators and in intensive care have fallen significantly from the heights they reached last month, the number who were on ventilators was still larger by 38 than its peak in January during the state's winter surge.

Dillaha said that's likely a reflection of the delta variant, which has been blamed for Arkansas' current wave of cases.

"I think from some of the doctors that I've talked to, with the delta variant, when people end up in the hospital they tend to be sicker than what we saw earlier than in the pandemic, so I think that that's what we're seeing here," Dillaha said.

She said she'd like to see the state's cases and hospitalizations continue trending down so that hospitals will have some "breathing room" when flu season starts this fall.

Although the previous season was unusually mild, as many people took precautions, such as wearing masks, to avoid the coronavirus, "my observation is that our adherence to those practices is not as high as it was last winter," Dillaha said.

She said flu shots are already available at many pharmacies and other locations.

It's recommended that children 8 years old and younger who haven't previously had a two-dose regimen of flu shots get theirs as soon as possible, she said, since they will need two spaced four weeks apart to be considered fully vaccinated against the flu.

Pregnant women, especially those in the third trimester, are also advised to get their shots as soon as possible, Dillaha said.

That's in part because the vaccine is not recommended for children younger than six months, but a pregnant woman who gets the shot passes along antibodies that help protect a child when it's born.

The average daily increase in the state's case count over a rolling seven-day period fell Thursday to 1,565.

Already at its lowest level since July 28, the number of cases that were considered active fell by 294, to 16,401, as recoveries and deaths outpaced new cases.

Active cases among employees and students at the state's public elementary and secondary schools also continued to decline Thursday after reaching record levels in late August and earlier this month, according to Health Department reports.

However, the reports showed increases in the number of active cases among students and employees at colleges and universities, and at private elementary and secondary schools.

From Monday to Thursday, the number of active cases in public school districts fell by 183, to 3,334.

As tracked in the Health Department reports, which are issued twice a week, the number has fallen continuously after reaching an all-time high of 4,833 on Sept. 6.

Despite the drop, however, the number of districts with five or more active cases rose by one, to 171, from Monday to Thursday.

The Cabot and Rogers school districts Thursday had the highest totals at 90 each, followed by the Fort Smith School District with 87 and Springdale, the state's largest district in terms of enrollment, with 77.

The Cabot School Board voted 4-3 earlier this week to relax its mask policy, making face coverings optional for students and employees in schools that serve grades seven through 12.

The Springdale School Board, which had initially mandated masks for kindergarten-through-seventh graders, voted 4-1 earlier this week to end its requirement.

School boards in other school districts are expected in coming days to reevaluate and possibly alter their mask requirements.

The board for the Bryant School District, which was listed as having 64 active cases, voted Thursday to base its policy on the number of cases among residents within the district's boundaries, as reported by the Arkansas Center for Health Improvement.

When the number over a two-week period is at least 30 per 10,000 residents, masks will be required in district buildings and buses.

Otherwise, they will be optional but "highly encouraged."

Administrators will review the data, and notify parents and staff members on Fridays whether the requirement will be in effect the following school day.

According to a report by the Center for Health Improvement on Thursday, the district had 250 new cases in the two weeks ending Monday, translating to a rate of 47 per 10,000 residents.

Examples of other active case totals listed in the Health Department report included 63 in Bentonville, 58 in Little Rock, 56 in West Memphis, 47 in Jonesboro and 40 in the Pulaski County Special district.

Statewide, a total of 16,121 public school students and school employees have tested positive for the virus since Aug. 1, according to the Health Department.

The Center for Health Improvement said the number of districts with 100 or more new cases per 10,000 residents within their boundaries over a two-week period fell from a record 59 last week to 35 this week.

Meanwhile, the Cleveland County and Magnet Cove school districts joined the Bentonville district in being the only ones in the state where 50% or more of the residents were fully vaccinated.

The percentage rose from 49% to 50% in the Cleveland County and Magnet Cove districts, and from 50% to 51% in the Bentonville district.

Although a few schools earlier this week announced shifts to virtual instruction because of covid-19 cases or quarantines, no additional shifts were reported to the state Department of Education's Division of Elementary and Secondary Education on Thursday.

The Little Rock School District reported that 10 students at six campuses had tested positive in the 24 hours ending at 3 p.m. Thursday.

An additional 17 students and two employees were required to quarantine after being near an infected person.

At colleges and universities, the number of active cases among students and employees rose by 32, to 544, from Monday to Thursday but remained down by 33 compared with a week earlier, according to Health Department reports.

The University of Arkansas at Fayetteville continued to have the largest number, although its total dropped by two, to 135, from Monday to Thursday.

Harding University in Searcy had the second-highest count Thursday at 77, followed by Arkansas Tech University in Russellville with 30 and the University of Arkansas for Medical Sciences in Little Rock with 26.

At private elementary and secondary schools, the number of active cases rose by nine, to 100.

Life Way Christian School in Centerton and St. Vincent De Paul Catholic School in Rogers tied for the highest totals, with seven each.

Also Thursday, Arkansas Attorney General Leslie Rutledge was among 24 Republican state attorneys general who signed onto a letter to President Joe Biden opposing a forthcoming mandate for businesses with 100 or more employees to require their employees to be vaccinated or regularly tested.

"Your plan is disastrous and counterproductive," the attorneys general said in the letter.

"From a policy perspective, this edict is unlikely to win hearts and minds -- it will simply drive further skepticism."

The officials argued that the mandate will cause workers to leave their jobs, straining an "already-too-tight labor market."

They also said such a rule, issued by the U.S. Department of Labor, would exceed the department's authority under the Occupational Safety and Health Act.

"There are many less intrusive means to combat the spread of COVID-19 other than requiring vaccinations or COVID-19 testing," the attorneys general said in the letter.

"The risks of COVID-19 spread also vary widely depending on the nature of the business in question, many of which can have their employees, for example, work remotely."

Rutledge said earlier this week that she planned to "vigorously defend Arkansans" from the vaccination rule.

Hutchinson said he would support legal challenges to the rule, which he contends "is not consistent with historical use of federal authority in public health matters" and "will increase vaccine hesitancy."

According to U.S. Centers for Disease Control and Prevention rankings Thursday, based on data as of Wednesday, Arkansas continued to have the country's 17th-highest number of new cases per capita over a rolling seven-day span.

In new deaths per capita, Arkansas went from tying with Mississippi for the second-highest rate during the week ending Tuesday to having the fifth-highest, after those in Louisiana, Georgia, Idaho and Mississippi, in the seven days ending Wednesday.

Dillaha said 20 of the deaths reported Thursday happened within the past month.

Of the others, two happened in March, one each was from December, January, February, April, May and July, and five were from early August.

She said she didn't know the reason for the delays in reporting the deaths.

She said 11.9% of the state's coronavirus tests were positive during the seven-day span ending Wednesday, up slightly from the 11.8% that was initially reported for the week ending Tuesday but still down from a recent high of 16.3% the week ending Aug. 4.

The number of people who have ever been hospitalized in Arkansas with covid-19 grew Thursday by 119, to 25,337.

At 7,021, the increase in vaccine doses that providers reported having administered, including second and third doses of the Pfizer and Moderna vaccines, was smaller by more than 6,200 than the one a week earlier.

The average number of doses administered each day over a rolling seven-day period fell to 6,614, its lowest level since the week ending July 20.

According to the CDC, the number of Arkansans who had received at least one vaccine dose grew Thursday by 3,041, to 1,653,908, representing about 54.8% of the population.

Among the states and District of Columbia, Arkansas continued to rank 37th in the percentage of its residents who had received at least one dose and 42nd, ahead of Louisiana, Tennessee, Georgia, North Dakota, Mississippi, Alabama, Idaho, Wyoming and West Virginia, in the percentage who were fully vaccinated.

Nationally, 63.5% of people had received at least one dose, and 54.2% were fully vaccinated.