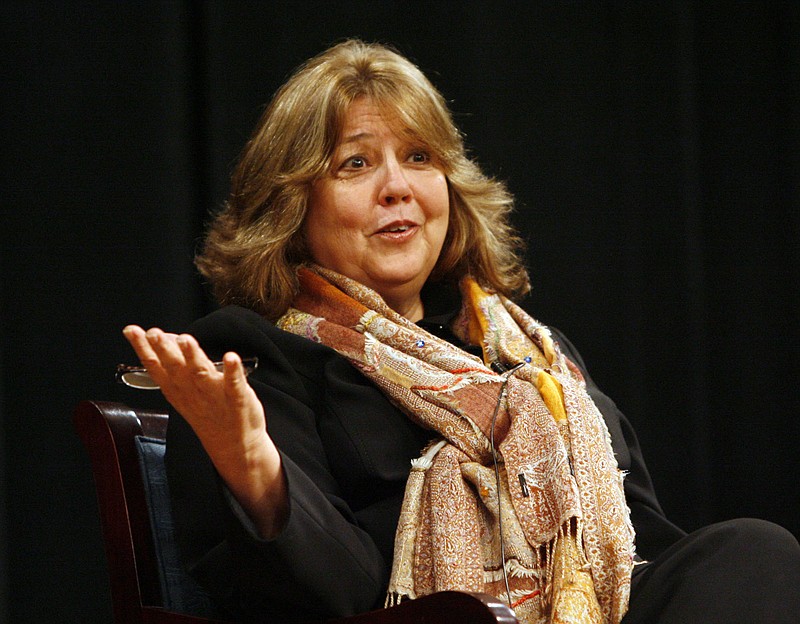 Linda Bloodworth Thomason spoke to an audience at the University of Arkansas campus in Fayetteville in 2006. (Democrat-Gazette file photo)

Linda Bloodworth Thomason says she created "Designing Women" to show America, via television, that there are intelligent, educated Southerners.

"Half the country wasn't showing up on television," she says.

TV portrayed Southerners as yokels and hayseeds — "The Dukes of Hazzard," "The Beverly Hillbillies," "Green Acres" — "even Mayberry, and even those people weren't too smart," she recalls. (Even now, she says, that situation hasn't fully corrected itself.)

And here were her father and uncles, all lawyers, all witty and quoting literature.

"I've got to get these people on TV," she recalls thinking.

The show aired on CBS from 1986-93, and the characters — four women running an Atlanta interior design firm — get a chance to live again in a stage play Bloodworth Thomason (now officially going by "L" instead of "Linda") wrote and which opens today at the Arkansas Repertory Theatre.

She started the script just at the start of the pandemic, with the coronavirus "growing like Topsy," and which delayed the play's opening by more than a year.

[RELATED: Southern by design — ‘Designing Women’ fast-forwards to 2020 onstage at the Rep]

"I finished it in April [2020], and it was supposed to have debuted in Fayetteville last summer," she says. The TheatreSquared production, a co-production with the Rep, premiered in September and October 2021.

"I wrote it really fast, but that's the way I wrote all the 'Designing Women' scripts."

The play brings the characters forward from the '80s and '90s to current day, or almost — it's set in 2020, when, says the playwright, "nobody gets along; we all have a jealous and fragile relationship."

The principal characters have, and haven't, aged in the interim, she says. "These women kept themselves up so well, and they're still beautiful." And after 30 years, they've gotten, perhaps, "quite a bit looser."

"It's fun to see who they've become, but the essence of who they were is intact," she says.

Bloodworth Thomason cites the TV show's on-air "hat trick," in that its audience was remarkably diverse, encompassing "coastal elites, evangelicals, conservatives, liberals. ... I got citations from the ACLU and Mitch McConnell."

It may have contributed to a lack of censorship from the network that actively squashed the Smothers Brothers a couple of decades earlier.

"I got away with murder on TV," Bloodworth Thomason admits, with scripts focused on discomforting topics that included being gay and domestic violence; one vigorously mocked then-Supreme Court nominee Clarence Thomas. She says that unbeknownst to her, then-network president Jeff Sagansky "had told the censors to leave me alone."

She says the TV show grew out of the experiences of her family — a grandfather who owned a newspaper in Corning, Ark., and, though chairman of the state Republican Party, was a civil rights advocate whose opposition to sundown laws brought him afoul of the Ku Klux Klan.

The family moved 30 miles north to Poplar Bluff, Mo.; the grandfather, whom the Klan eventually shot down at a train station, had four sons who became lawyers — Bloodworth Thomason's father and three uncles — whose preaching of tolerance inspired her to bring them to life on TV. She concedes that their outspokenness would be better tolerated in female characters than in male.

And when it came time to cast "Designing Women," she told the casting agents, "Get the best looking women you can find, because they're going to be saying some really bad stuff."

Her script, like the show, "lets every voice be heard, but it does come down on the side of progressiveness and against political correctness." Fayetteville audiences accepted even the things with which they didn't agree because they were laughing, she says.

There has been interest in the show in Los Angeles, Dallas, Atlanta and even for Broadway, and she hopes to re-create that audience tolerance — her goal is for folks "to laugh sitting next to somebody you can't stand."

Part of her proceeds from the show, she says, will go to her Designing Women Foundation, which she created in 1989 and which has since paid to send 175 women onward to higher education, including college and trade schools.