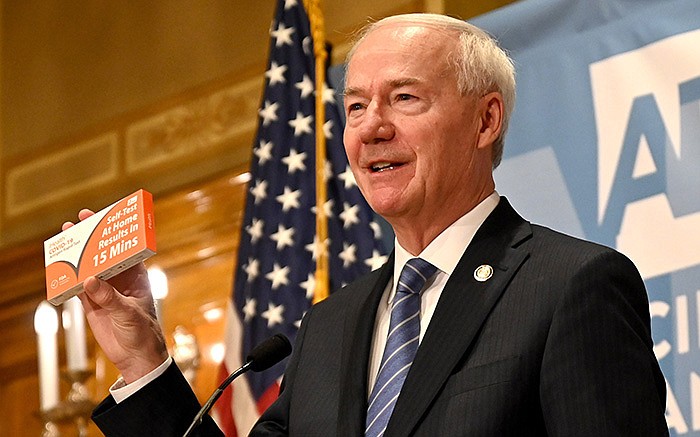 Gov. Asa Hutchinson said Friday that 370,000 of the 1.5 million home covid-19 tests purchased by the state remain available for free at local health units in addition to any remaining supplies at libraries and other organizations. More photos at arkansasonline.com/122gov/. (Arkansas Democrat-Gazette/Stephen Swofford)

The number of people hospitalized with covid-19 in Arkansas rose to an all-time high on Friday for the fourth day in a row, while the state's count of cases rose by more than 13,000, the second-largest one-day increase since the start of the pandemic.

With new cases outpacing recoveries and deaths, the number of cases in the state that were considered active rose by 3,512, to 101,141, representing more than 3% of the state's population and setting a new record for the second straight day.

At his weekly news conference on the pandemic, however, Gov. Asa Hutchinson pointed to signs that the surge in cases powered by the omicron variant was near a peak, with new cases potentially declining by sometime next week.

He noted that new cases have already started to decline in some northeastern states and that Arkansas has posted some daily increases this week that were smaller than the ones a week earlier.

Also, Department of Health data shows that new cases have begun to decline among Arkansans age 19-24, an age group that has had one of the highest infection rates during the omicron surge.

"Covid has thrown so many curveballs at us, you don't get cocky about it, and you want to wait and see, but there are some hopeful indications that over the course of the next week, we'll start seeing a decline in that increase in cases every day," Hutchinson said, echoing earlier comments at the news conference by Health Secretary Jose Romero.

[Video not showing up above? Click here to watch » arkansasonline.com/122govbrief/]

While it brought the total to a record, it was the smallest one-day increase since Dec. 30, when the number stayed the same as the day before.

Before this week, the record for the total number of hospitalized covid-19 patients was 1,459 on Aug. 16, during the summer surge powered by the delta variant.

The state's count of cases rose by 13,073, which was second in size only to the spike of 14,494 cases on Wednesday for a single-day jump since the state's first infection was discovered in March 2020.

After falling a day earlier, the average daily increase over a rolling seven-day period rose Friday to 8,932, which was still below the record average of 9,122 cases a day the week ending Sunday.

The state's death toll from the virus, as tracked by the Health Department, rose Friday by 14, to 9,484.

The totals of the state's virus patients who were on ventilators and in intensive care both rose Friday after falling a day earlier.

Those on ventilators rose by eight, to 195, its highest level since Oct. 3.

Both totals remained below their previous peaks during surges last winter and in the summer of last year, although the number in intensive care was approaching the level it reached last winter.

Ventilator usage peaked at 388 during the summer surge last year and at 268 last winter.

The number who were in intensive care peaked at 558 during the summer and 458 in January 2021.

At hospitals around the state, just 36 intensive care unit beds were unoccupied on Friday, down from 47 a day earlier.

The percentage of ICU beds that were occupied with covid-19 patients rose from about 35% as of Thursday to 37%.

In response to the rising number of covid-19 patients, the state last week allocated $50.1 million in American Rescue Plan Act funds to open 265 beds at 11 hospitals around the state.

According to information presented at the news conference, at least 175 of those beds had been opened as of Friday. More than 120 were already occupied by covid-19 patients.

"I'm hopeful that with the extra capacity we'll be sufficient," Hutchinson said. "We're going to be watching the cases in the coming week as well as the trend in hospitalizations and making a decision as to whether more has to be done."

Because it can take several days for someone to become sick enough to be hospitalized after they become infected, it's possible that hospitalizations will keep rising for some time as the state's new cases begin declining, Dr. Jennifer Dillaha, the Health Department's chief medical officer, has said.

Hutchinson noted Friday that the number hospitalized, while at an all-time high, hasn't soared to the same degree as the state's new case numbers.

Compared with their peaks during the delta surge in the summer of last year, the active case total on Friday was almost four times higher, while the number hospitalized was about 14% higher.

"With the heights of the cases, but the much slower increase in hospitalizations, [it] reflects the fact that the omicron variant is not as severe in consequences in hospitalizations as the delta variant, and that gives us a little more margin to work with," Hutchinson said.

The percentage of the state's coronavirus tests that are positive has continued to rise, although not as quickly as it did earlier in the omicron surge.

Over the seven-day span ending Thursday, the percentage was 34.9%, up from initial reports of 33.9% for the weeks ending Wednesday and Tuesday.

Hutchinson has said he wants to keep the percentage below 10%, but it has been above that level since the week ending Dec. 22.

Greg Crain, administrator of Baptist Health Medical Center-Little Rock, said at the news conference the state's "health care infrastructure would have been in very, very deep trouble" if it weren't for decisions made by Hutchinson and other state officials.

He said his hospital had a record 138 covid-19 patients on Friday.

"I worry that the general public doesn't think that covid's a threat to them, that the omicron variant is not a threat, but people get very, very sick," he said, adding that most of the covid-19 patients in critical care are not vaccinated.

He said the omicron surge has caused "the most critical staffing shortage among hospital staff we have seen during the entire pandemic."

But he pointed to a reduction in hospital staff who are off work for reasons related to covid-19, as well as a drop in demand for testing, as encouraging signs.

Baptist Health spokeswoman Cara Wade said 280 of the health system's 11,000 employees were off for virus-related reasons on Friday, up from 259 a day earlier but down from 584 earlier in the week.

She said the Little Rock hospital tested 667 people for covid-19 at its drive-thru site on Thursday.

"This number, though still much higher than in previous surges, continues to decline from the record high number of more than 1,700 a few weeks ago," Wade said in email.

At all of Baptist's testing sites, 45.1% of the tests were coming back positive, she said.

"In addition, we have the ability to check markers for variants in our testing and, of those, we are seeing that 90 to 95 percent have markers for omicron," she said.

She said the health system had 328 covid-19 patients at its 11 hospitals around the state, down from a record 333 on Thursday.

The patients on Friday included 95 who were in intensive care and 55 who were on ventilators.

She said the health system hasn't had to limit non-urgent procedures, although that "remains an option to create hospital capacity in the future if needed."

At its hospitals in Little Rock and Springdale, Arkansas Children's had 42 covid-19 patients on Friday, up from 40 a day earlier but still down from a record 46 on Wednesday, spokeswoman Hilary DeMillo said.

The patients on Friday included four who were in intensive care and three who were on ventilators.

More than half the 42 patients were at least 5 years old, making them eligible for vaccination, but only eight had been fully vaccinated, she said.

Hutchinson said 370,000 of the 1.5 million home covid-19 tests purchased by the state late last month remained available for free to the public at the Health Department's local health units.

That's in addition to any remaining supplies at public libraries and other organizations that received some of the tests.

The governor said he didn't have any immediate plans to purchase more of the tests now that people can order free home tests online from the federal government at covidtests.gov.

On the vaccination front, he said, "All indications are that the Legislature will favorably look at" a request by the state Department of Human Services to impose a vaccine requirement at seven of its health care facilities in line with a federal requirement, upheld by the U.S. Supreme Court last week, for facilities that receive reimbursement from Medicare or Medicaid.

Act 977, signed by Hutchinson in April, prohibits state-run health care facilities from imposing a vaccine requirement unless it's approved by the Legislative Council.

Hutchinson said Friday that he opposed the federal mandate, believing that it "would be costly to the state in terms of our employees and providing good health care," but "the choice is, do you lose access to the funding that impacts our health care system, or do you put the vaccine requirement in place?"

He said the slowdown in vaccinations in the state, despite the surge in cases and hospitalizations, "remains a concern to me."

"We are making progress, but it is very incremental, it is slow, and the fact is that Arkansas reflects much of the nation, that there is some hardened resistance to going beyond where we are in our percent vaccinated," he said.

Health Department spokeswoman Katie White said all of the deaths reported Friday occurred within the past month.

The number of people who have ever been hospitalized in the state with covid-19 grew Friday by 224, to 31,848.

The number of the state's virus patients who have ever been on a ventilator rose by 16, to 3,289.

The Health Department's tally of vaccine doses that had been administered rose Friday by 5,155, an increase that was smaller by more than 2,900 than the one a week earlier.

Booster shots made up 43% of the most recent increase.

The count of first doses rose by 1,418, which was smaller by almost 1,300 than the increase in first doses a week earlier.

The average number of total doses administered each day over a rolling seven-day period fell Friday to 5,494, its lowest level since the week ending Sept. 27.

The average for first doses fell to 1,687, the lowest average since the week ending Oct. 26.

According to the U.S. Centers for Disease Control and Prevention, 64.6% of Arkansans had received at least one dose as of Friday, a percentage that hadn't changed from a day earlier.

The percentage who had been fully vaccinated rose from 52.3% as of Thursday to 52.4%.

Of those who were fully vaccinated, 35% had received a booster dose, up from 34.9% a day earlier.

Among the states and District of Columbia, Arkansas continued to rank 37th in the percentage of its population who had received at least one dose.

In the percentage who were fully vaccinated, it went from being 46th to being roughly tied with Tennessee for 45th, ahead of Louisiana, Mississippi, Wyoming, Alabama and Idaho.

Nationally, 75.4% of people had received at least one dose as of Friday, and 63.3% were fully vaccinated.

Of those who were fully vaccinated nationally, 39.5% had received a booster dose. 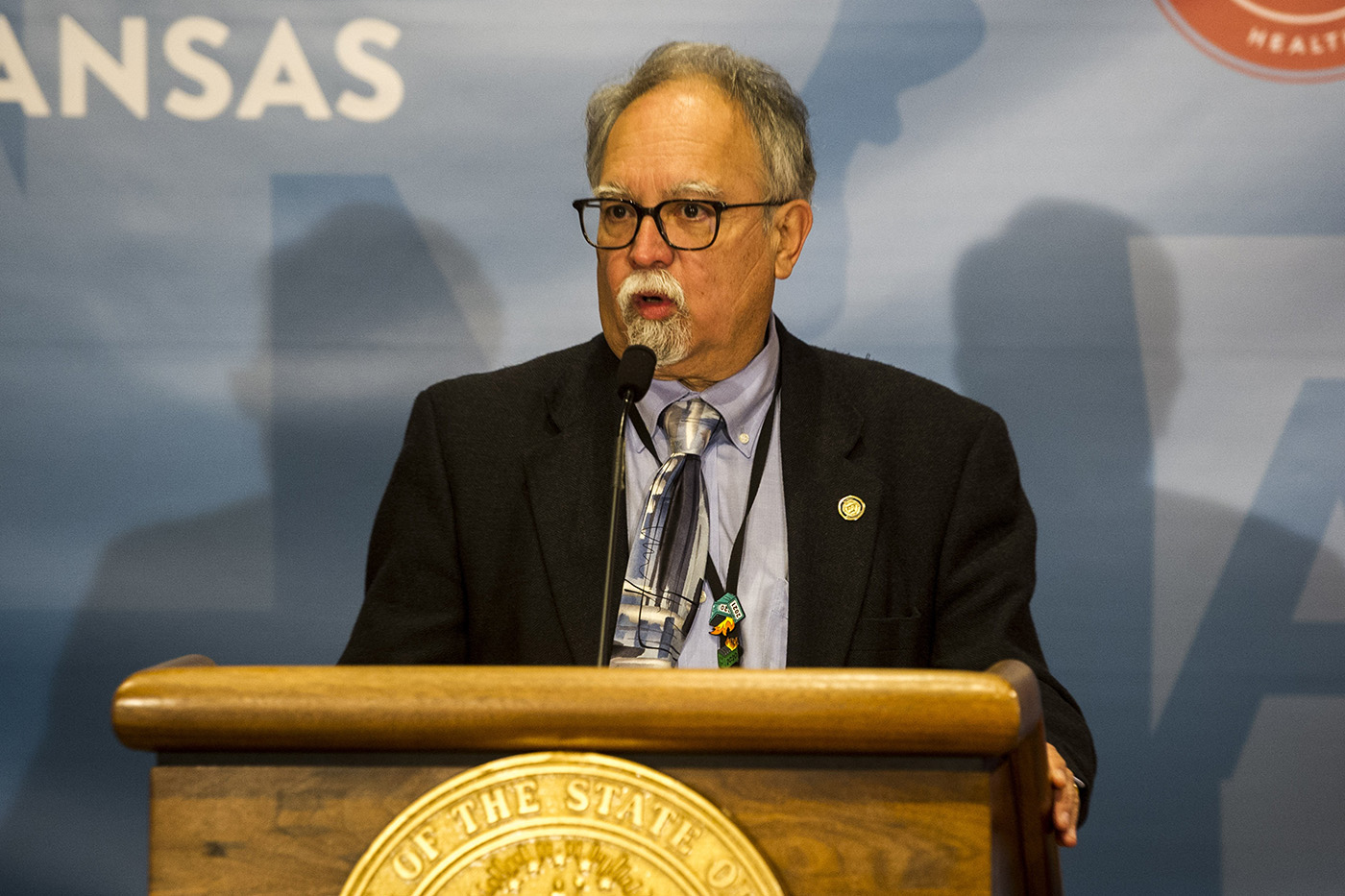