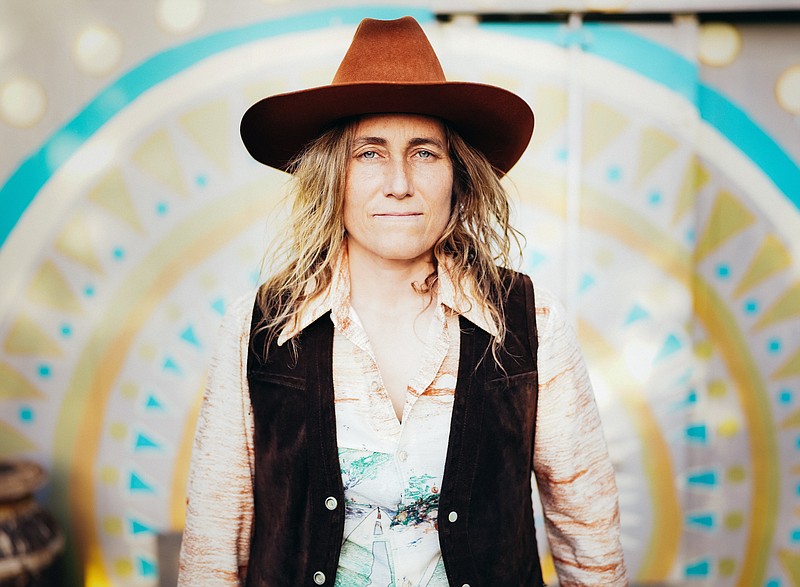 Melissa Carper’s new album, “Ramblin’ Soul,” will be released on Friday. The singer-songwriter-bassist will celebrate with a Friday show at White Water Tavern in Little Rock. (Special to the Democrat-Gazette/Lyza Renee)

"Ramblin' Soul," the title of Melissa Carper's toe-tappin' new album of groove-laced Western swing, is rather apt. The singer-songwriter, originally from Nebraska, has led a pretty peripatetic life.

She moved to Eureka Springs in the mid '90s and made that her home base for years but there were also stints in New Orleans, New York, Texas and Nashville, Tenn. Then, of course, there is her life as a touring musician in bands like Arkansas-based Sad Daddy, Buffalo Gals and The Carper Family. In 2020 she and her partner and band mate, fiddle player Rebecca Patek, moved to a friend's farm near Bastrop, Texas, where they were given housing and organic vegetables in exchange for working on the property. It was also where Carper, who plays stand-up bass, started assembling the songs that would make up "Ramblin' Soul," which will be released via Thirty Tigers on Friday.

She will celebrate the new album with a Friday show at White Water Tavern in Little Rock.

"I'm excited that I'm doing an Arkansas show for the release because I still consider Arkansas home," the 50-year-old Carper says, adding that she will be joined by Patek on fiddle and Doug Strahan on guitar for the show.

"Ramblin' Soul" is the follow-up to "Daddy's Country Gold," Carper's acclaimed album from 2021. It was recorded in Nashville at the Bomb Shelter, where she also recorded "Daddy's Country Gold." The albums also share many of the same musicians as well as co-producers Andrija Tokic and Dennis Crouch.

"I went with a lot of the same players because they are so good and they really get my style and give it that old feel," Carper says.

Ah, yes, that old feel. It's what makes Carper's music such a joy. She has been soaking up influences from Hank Williams and Lead Belly to Billie Holiday for most of her life and is able to weave these and other vintage touchstones with her own experiences. Her songs, delivered in her reedy vocals, are modern but at the same time sound like they came from a honky-tonk jukebox, circa 1949.

With "Ramblin' Soul," Carper expands her reach and skillfully embraces other styles while remaining true to her own vision.

"I wanted 'Ramblin' Soul' to sound a little different from 'Daddy's Country Gold.' I do write some stuff that sounds like R&B or old blues and soul, so I thought I'd put some of that in the mix. And I still have the country-jazz stuff, too; there's a little bit of everything."

The album is overflowing with Carper gems; there's the weeping steel guitar of the shuffling title cut, the spry swing of "Texas, Texas, Texas" and the mischievous "Boxers on Backwards." "Ain't A Day Goes By," with Hammond B3 organ by John Pahmer and gospel-tinged backing vocals from Kyshona Armstrong, Nickie Conley and Maureen Murphy, is an aching slice of country soul that sounds like a lost Charlie Rich classic. Carper teamed with Gina Gallina of Arkansas to co-write the self-explanatory "I Do What I WANNA" and tackled two covers, Brennen Leigh's "Hanging on to You" and "Hit or Miss," the late singer Odetta's swaggering ode to individuality. On the latter, she mixes the slinky vibe of the original with her own rootsy spirit, while the former gets a funky, mid-tempo Motown spin.

The days leading up to the album's release are "exciting," Carper says. "I've got a distributor, Thirty Tigers, helping me get my album out into the world. The work really starts five or six months before the album is out. I'm also trying to get ready for the shows and get all of that together. I'm having to work on the songs myself to make sure I can play 'em right ... [Crouch] played bass on 'I Do What I WANNA' and I'm trying to learn his bass line and sing at the same time and I'm like, oh my gosh, can I do this?"

Friday's show, by the way, is not the last time Carper will be at White Water this year. She returns with Sad Daddy for a New Year's Eve show.

"We've never played New Year's Eve there, so it's going to be fun," she says.