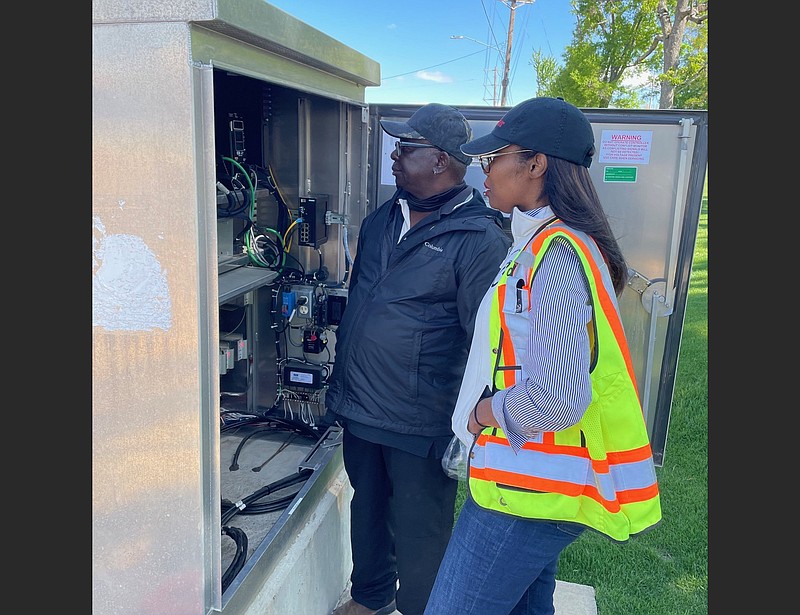 Helen Dowdell watches as her invention, a traffic-signal system marketed as Wheeldestrian, is installed. The device integrates with existing traffic control systems, displaying the international symbol for accessibility and allowing a wheelchair-bound pedestrian time to cross the street safely. (Special to the Democrat-Gazette)

In 2019, William "WD" Feeney attempted to cross a Columbus, Ohio, street in his wheelchair. He never made it to the other side as a dump truck struck and killed the 30-year-old educator in the crosswalk, sending shock and sadness throughout people in the community.

Arkansas native Helen Michelle Brown Dowdell, who was working in Columbus at the time, was one of them.

"I was floored because [the accident] was less than a block away from one of our offices. Everyone was talking about it," says Dowdell, who has since made her home in the Atlanta area. "I used to see this young man in the community on occasion, very independent, a grad student. I was overwhelmed with grief. I was so burdened by it, like, this shouldn't happen."

What Dowdell didn't know then was just how common such accidents occur.

A 2015 Georgetown University Medical Center study found that of the estimated 5,000 fatal traffic wrecks occurring annually between 2006 and 2012, those involving people in wheelchairs had a 36% higher fatality rate than pedestrians on foot.

What's more, recent statistics indicate the problem has only worsened. The U.S. Department of Transportation reported in March that despite substantially fewer miles driven that year due to covid, 2020's total traffic fatalities were the highest since 2017. As a category, traffic fatalities involving pedestrians were up almost 4% year over year from 2019.

About 3.3 million Americans use a wheelchair at any given time, per Global News. But for Dowdell, the concern boiled down to a considerably smaller sample size.

"My father [is] a veteran and is in a wheelchair," she says. "Thinking of him, I really feel like the issue presented a whole larger spectrum of uncertainty that hadn't been addressed. For a person in a wheelchair, the major organs are located in almost complete, perfect alignment with the front of the car. There's no cushion, no airbag, no one can travel in a bubble. It's just an unfortunate collision and most of the time it's fatal.

"So many scenarios ran through my brain over that, and I just started building solutions that could potentially work. One night, I literally woke up out of my sleep and sketched it out."

An invention was born. 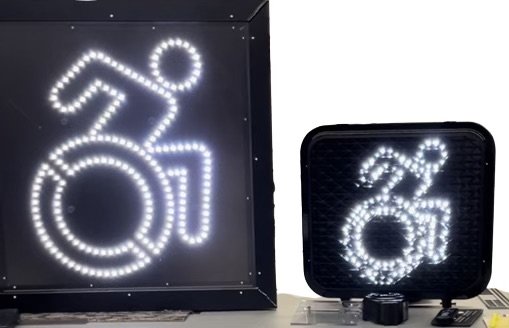 Wheeldestrian, the brainchild of Arkansas native Helen Dowdell, includes a sign mounted between traffic lights displaying the international accessibility symbol. Modified pedestrian signal heads (those metal boxes that flash “Walk” and “Don’t Walk”) are situated on each side of the intersection with call buttons used to activate the system. (Special to the Democrat-Gazette)
SAFE CROSSINGS

Dowdell's inspiration was for improved crosswalk safety devices, which strikes at the heart of the problem of pedestrian traffic deaths. The Georgetown study showed that about half of fatal crashes involving wheelchairs and vehicular traffic occurred at intersections and that in 40% of cases, traffic flow was not controlled.

Dowdell's idea was for a device that would provide a better warning to motorists as to who is in, or about to enter, the crosswalk. Being seated, wheelchair users are lower and can therefore be harder for motorists to spot, especially in larger vehicles and trucks ... a situation made worse by distracted drivers.

"It's what we call a sightline visibility issue," she says. "That's not just for people who use mobility aids. It's also for blind pedestrians and people who are of small stature. Signal-light intersections use a regular traffic signal to regulate traffic that was introduced at a time when people who were wheelchair bound or blind weren't necessarily independently traveling as frequently as they are now.

"Also, if you think about it, science and technology have far exceeded the advancement of our intersections in our infrastructure. Electric vehicles, for example, have come quite a long way, right? You don't hear a thing as they approach a crossing, unlike other vehicles."

Dowdell's device integrates with existing traffic control systems, displaying the international symbol for accessibility — essentially the same icon that marks parking spaces reserved for those with enhanced physical needs — and making other adjustments to allow a pedestrian time to cross the street safely.

"The disability community needs access, and we have to identify what that is and acknowledge them, see them and give them the same opportunities that we all have by creating equity at the intersection," she says. "Our system puts the power back into the person's hands so they can access the same areas as safely as a walking pedestrian."

The innovative system, marketed as Wheeldestrian, was also designed in such a way to make it easy for communities to adopt it without completely throwing out their existing infrastructure.

"This doesn't restrict anything, it doesn't break down anything — we don't even increase the carbon imprint, even though we're creating something totally new," Dowdell says. "What I didn't want is for cities to feel like we're coming in and shoving something down their throats in addition to all the other things they're doing. Our product is a real-world device that is ready to be integrated into existing traffic systems, resembling a plug-and-play piece of additional technology."

Wheeldestrian's system includes a sign mounted between traffic lights displaying the international accessibility symbol. Modified pedestrian signal heads (those metal boxes that flash "Walk" and "Don't Walk") are situated on each side of the intersection with call buttons used to activate the system.

"You press [the call button] and it activates the timing cycle, flashing the ... symbol ... for the motorist to be aware that someone will be entering the crosswalk who requires a mobility aid," Dowdell says. "A lot of times people are distracted, using their phone, talking in the car, what have you. This gives a great opportunity for motorists to know that people are there. And it also creates an inclusive environment for everyone."

During development of the system, Dowdell says she spent considerable time gathering data from various stakeholders in communities, including municipal engineers and individuals and organizations representing various segments of the population, to determine how the system could have the widest positive impact.

"This is a great thing, because there are so many people who don't identify as having a disability that this could benefit," says Sharon Giovinazzo, president of Little Rock-based World Services for the Blind. "It's not unlike when we made curb cuts in the sidewalks. That was originally for people in wheelchairs, but then you had baby strollers and grocery carts and all this stuff that took advantage of it." 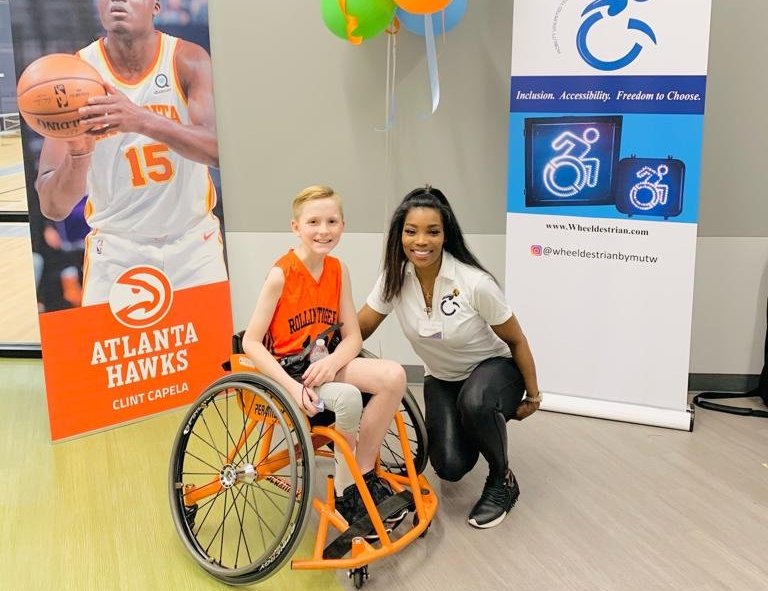 Giovinazzo says the system also makes strides in normalizing various physical differences within the population. Displaying the international symbol for accessibility in intersections, along with the familiar upright walking figure, accommodates both levels of mobility on the same plane.

"This is one of those things that's going to reduce the number of people who identify with a disability," she says. "Many people don't identify as having a disability as it is, like the grandma who doesn't say 'I'm disabled' — she says, 'I'm just slower than I used to be, honey.' This supports that mindset."

Such attitudes are familiar to Dowdell, who grew up in a household that didn't accept excuses, favoring instead hard work and grit as a means for self-improvement and the path to success.

"I'm a military child and as a little girl, we moved to southeast Arkansas where I spent the majority of my childhood," she says. "I grew up in what they call the Mississippi Delta side of Arkansas in Desha County. It was a very humble childhood with two working-class parents.

"My mother was a hairdresser who started off her career as a nurse and she used to clean homes, too. She was my hero, and I began working with her when I was about 10 years old. As a young girl I would go with her to clean houses. And in her salon, I was the shampoo girl — we called it 'scratchin' the scalps.' A lot of her clients were working-class ladies. They weren't super-fancy; they bartered to get the things they needed.

"One of the beautiful things I loved about my mother and the women who were in that community, they were all hard-working and they supported each other. It was always a sense of empowerment."

Seeing her mother's work up close helped Dowdell develop an entrepreneurial mindset, something that led to the creation of her traffic system through her company, Mobility Unlimited Technology Worldwide, based in Georgia. From there, she has been meeting with city leaders in various communities to sell her vision for safety and inclusion for all.

"We spent a considerable amount of time in R&D [research and development]; we didn't just pop out there," she says. "I've been pleased with the reception we've had from the municipalities and cities. I've been very impressed with how they want to protect all their citizens. We expected some pushback since we're the only other electromagnetic actuator outside of the traffic signal, but that has not necessarily been the case.

"Once the education is there, once the municipalities know what's going on, I'd say for about 80% to 90% of the time it's a pretty smooth process."

Dowdell says that while it's humbling to be recognized as a groundbreaking female entrepreneur — and in the heavily male-dominated tech field at that — the true reward is the change she feels she is helping to bring about within communities. Enhancing accessibility, she says, is a key part of overall inclusivity with the safety elements of Wheeldestrian being a nice bonus.

"I wake up every day feeling like I need to do something; it's just a part of my purpose," she says. "You can't always wait for someone else to do something for you; sometimes you have to be the one to make something better than you found it. And I feel like God tapped me for this.

"There's been a lot of challenges, and in some ways, this has been a heavy burden. I got a lot of responses from people who don't have any understanding of what we are trying to do. A lot of them say, 'Why would you even go in the intersection if you're not walking? You shouldn't be there. It was just an accident.' Nothing is just an accident, it's an opportunity. The quicker we can learn that, the better off we'll be as a society."