But the big news in The Arkansas Gazette was just below it — a would-be assassin’s attack on President William McKinley at a world’s fair in Buffalo, N.Y. The shooting had occurred in the Temple of Music at the Pan-American Exposition, as the Ohio Republican was shaking hands with a long line of visitors.

The gunman, initially referred to as Fred Nieman of Detroit, had been identified hours later as Leon Czolgosze (the correct spelling of his name came later).

On Sept. 6, he had approached McKinley with what appeared to be a bandage wrapped around his hand; it concealed a .32 caliber revolver.

“In an instant, pleasure gave way to pain, admiration to agony, folly turned to fury and pandemonium followed,” according to the Page 1 account.

Almost immediately after the weapon discharged civilian James Benjamin Parker and two Secret Service agents had tackled the gunman, wrestling away the weapon.

Initial reports were ominous. “The president is fatally hurt,” one of the bulletins in the Sept. 7 edition stated. But another said McKinley was rallying and “may recover.”

By Sunday, Sept. 8, the criminal’s exact surname — Czolgosz — would emerge, along with a glimpse of his religious and political views (“Strong Infidel and Socialist,” the Gazette noted).

The fate of the still-conscious president, even then, remained uncertain. “He Has Hope … Talk Is Optimistic” one Page 1 report claimed, while another declared: “By a Thread: Now Hangs the Life of the President.”

Death would come for the president Sept. 14. “God’s will, not ours, be done,” he reportedly told his wife before expiring.

The Gazette Publishing Co. existed to promote the Democratic Party; the chairman of its board of directors at the time of the attack was banker W.B. Worthen, a staunch Democrat, and most Gazette readers were Democrats. McKinley had received just 25% of the vote in Arkansas in 1896, climbing to 35% in 1900. Still, the Methodist leader’s piety had made an impression, even in the Solid South.

The president, the Gazette said, had “lived a Christian and died as one,” adding, “that such a sweet-tempered, tender-hearted man should be shot down, even by an anarchist, seems almost inconceivable.”

In the wake of McKinley’s death, “let us do away with anarchism first and presidential handshaking afterward,” it added. 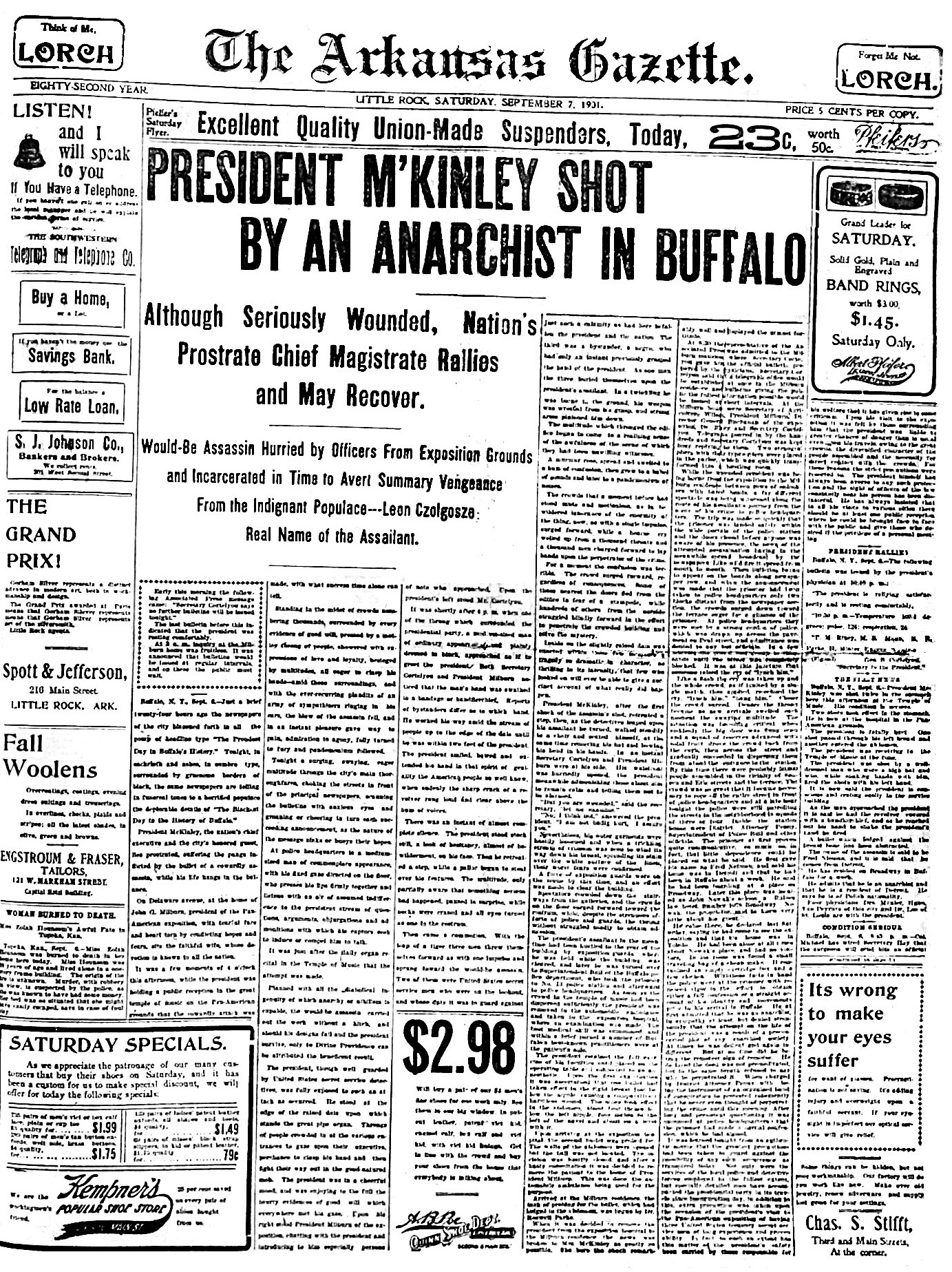