Under the command of Capt. E.J. Smith, the enormous luxury steamer RMS Titanic began its maiden voyage April 10, 1912, and was slated to sail from Southampton, England, to New York.

On the night of April 14, Titanic struck an iceberg and sent out a call for help; but the huge liner sank in just four hours, before any of the ships in the vicinity could arrive.

The launch of the world’s largest passenger vessel had received massive publicity, and so after Titanic sent its distress call, concern shot around the world. Its condition wasn’t clear when the Arkansas Gazette reported April 15 that the Titanic had struck an iceberg and was sinking.

Though instruments all along the Atlantic Coast had “turned to catch from any source the slightest hope” from any of the ships on their way to help at the scene of what “may be recorded as the world’s greatest marine horror,” not “the slightest syllable of encouragement” came through.

The Gazette speculated about the number of casualties even as Titanic’s 886 survivors were on their way to New York, plucked from lifeboats by the steamer Carpathia. “In the lack of even a line from a survivor, imagination falters before even trying to conjecture what passed as the inevitable became known, and it was seen that of the more than 2,000 human lives with which she was freighted there could be hope of saving, as it appears, far less than half,” the Gazette reported.

The White Star line office in New York was besieged by journalists and anxious family members of passengers; officials insisted throughout the day April 15 that a sufficient number of lifeboats were aboard to take all the passengers from the Titanic, if indeed the incident called for evacuation, which they doubted. But the reports of the Titanic’s sinking were confirmed that evening, a tragic contradiction to their initial confidence that “‘the Titanic was unsinkable,’ that the steamship was safe and that there would be no loss of life.”

The picture on Page 1 of the April 16, 1912, Gazette depicts rescued people reaching safety, but they were not passengers of Titanic. The photo was taken in Modoc, Arkansas, one of many places in the state where floodwaters were displacing residents. Titanic coverage and reports of the floods in Arkansas dominated the page, and lists of Titanic’s cabin passengers overflowed onto Page 10. 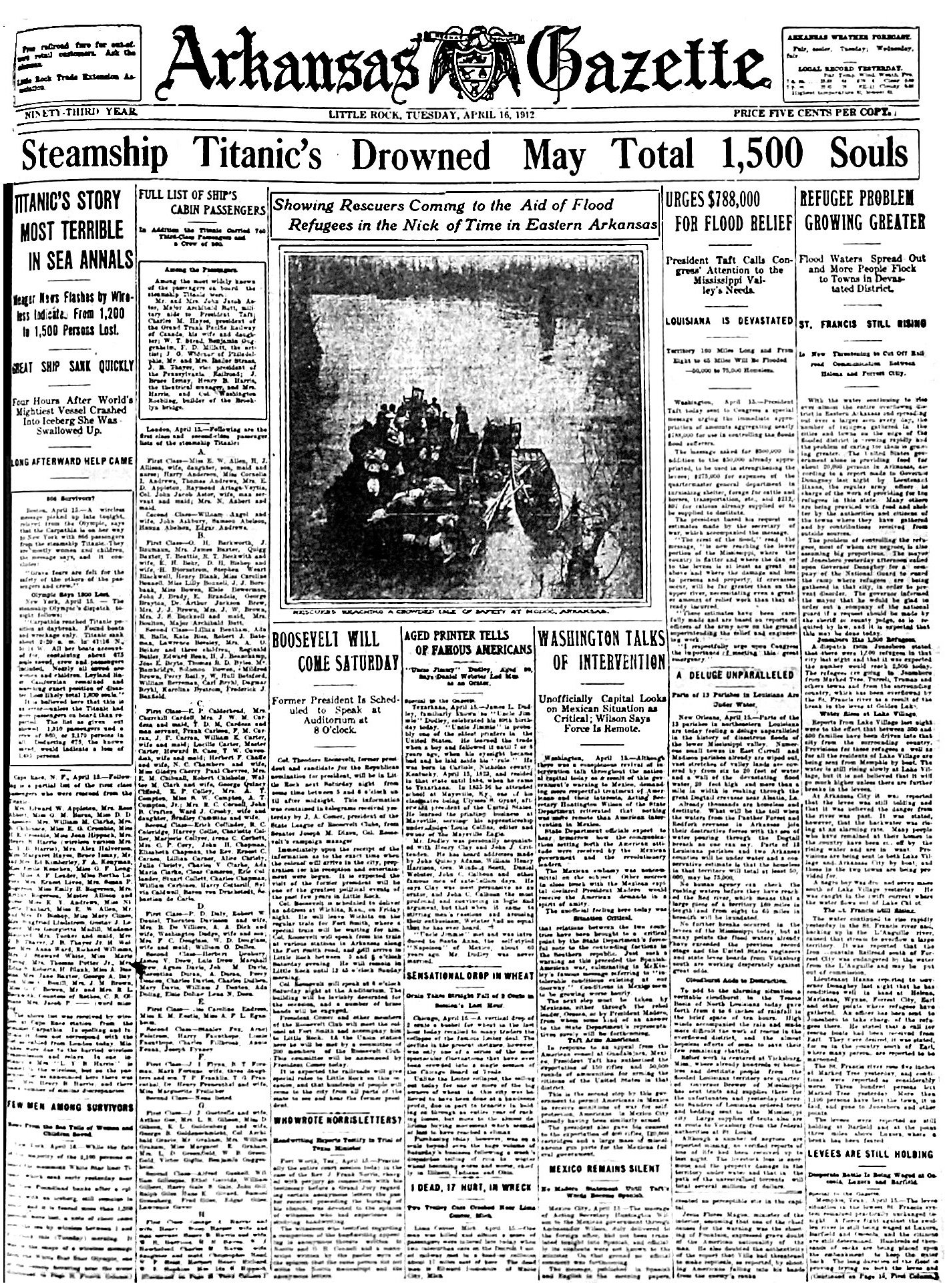