July 29, 1919, the Arkansas Gazette’s front page reported that the state Legislature had ratified the 19th Amendment to the U.S. Constitution, which ensures that no citizen can be denied the right to vote on the basis of sex.

The Susan B. Anthony Amendment sailed through a special session convened by Gov. Charles Brough on July 28, 1919. The vote was 29-2 in the Senate and 75-17 in the House. Those totals don’t suggest the racial arguments expressed, on the record, against — and for — ratification.

For example, Sen. W.L. Ward of Lee County spoke for 20 minutes against ratification. The Gazette reported that his arguments boiled down to: “If this amendment is ratified by this legislature today, there will be a domination of the negro race in the South.”

He was reassured by Sen. R.L. Collins of Drew County, who supported ratification, that white men would stay in power: “We’ll attend to the negro vote all right.” To illustrate, Collins told a story: “I remember one time I was in charge of a ballot box in which there were 319 negroes’ votes and only 17 white men’s votes. I was riding mule-back. Just as I got about in the middle of the bridge while crossing a creek, my mule suddenly became frightened, pitched me off and I accidentally let the ballot box drop into the creek. Neither box nor the votes have been seen since.”

The Gazette reported that messages opposed to ratification were read from out-of-state groups. These warned that the amendment was a “force bill” that would take away states’ rights, that women didn’t want to vote, that the “haste” to ratify was unseemly, partisan and related to the 1920 presidential election.

Miss Charlotte Rowe of Yonkers, N.Y., field secretary of the National Association Opposed to Woman Suffrage, declared that the 700,000 home-loving, quiet women she represented as well as a million even more quiet women “look with confidence to you, in whom the high traditions of the South still live, to protect us from this device of Northern abolitionists, which, if adopted, will, it seems to us, be not only debasing in its effects upon woman character, not only productive of discord in the sweet harmony of the family circle, but will inevitably result in striking down the barriers which you and your fathers have raised between Anglo-Saxon civilization and those who would mongrelize and corrupt it.”

Arkansas was the 12th state to ratify women’s right to vote and the second former Confederate state, after Texas. Louisiana, Alabama and Georgia already had said no. And the rest of the old South also would say no — for a decade or more. Mississippi wouldn’t come around until 1984. 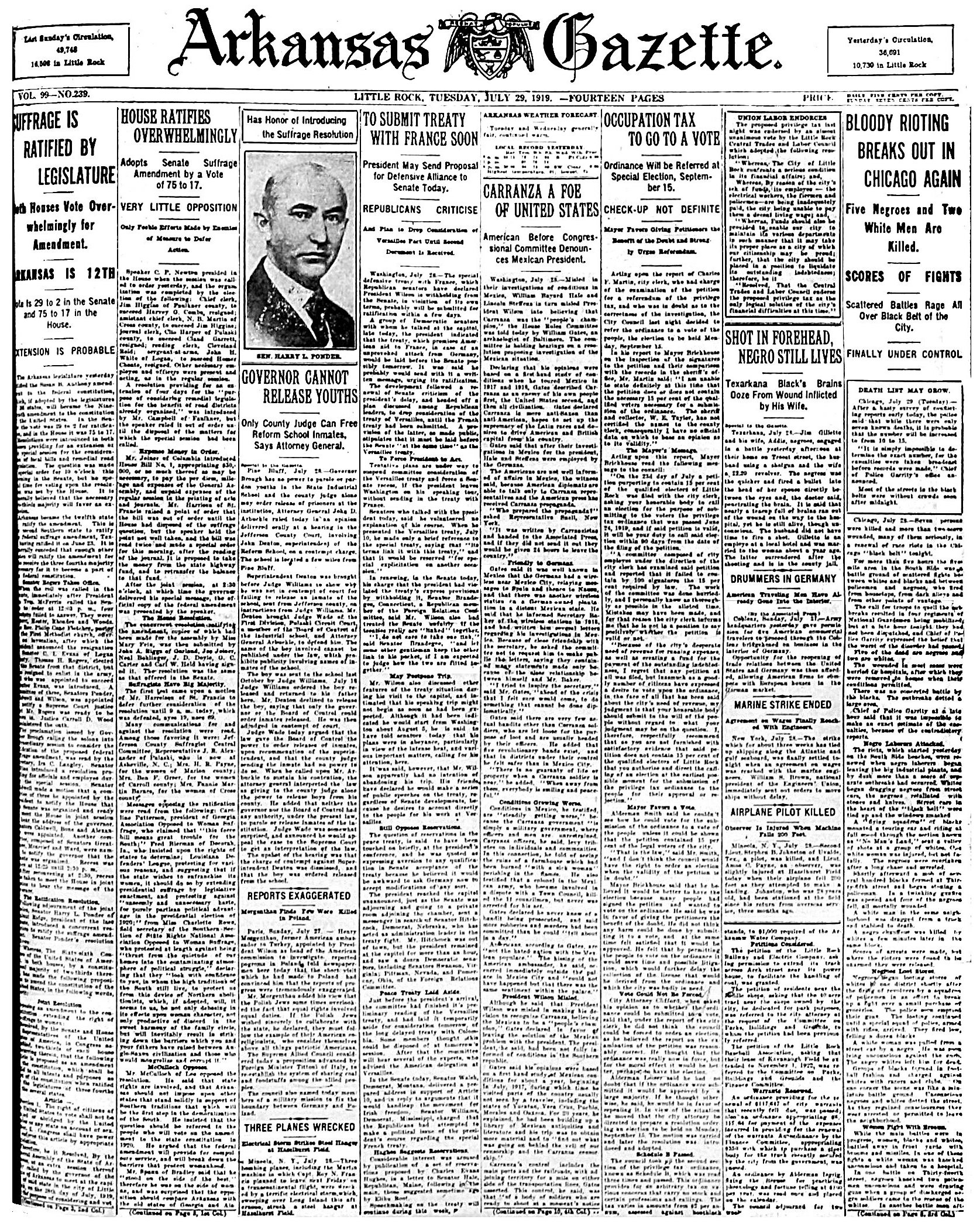