The first federally licensed radio station in Arkansas was 5YM, a weak transmitter at the University of Arkansas, Fayetteville. It grew out of engineering professor William Gladsen’s experiments with wireless telegraphy and Morse code.

That transmitter was dismantled during World War I. By the time it was resurrected and licensed as KFMQ in late 1923, Arkansans had fired up about a dozen stronger stations. Especially at night, Arkansas radiated concerts, news bulletins, sports scores, sermons and even a Radio Godmother who told bedtime stories. But these stations came and went.

In his seminal history Arkansas Airwaves, Ray Poindexter explains that WOK, WSV, WCAC, WGAR, WCAV, WEAX, KFMB and the like had to reapply for licensure every three months, and their signals rode the same frequencies used by stations in other states.

A growing audience tuned in, using handmade “crystal” sets or expensive, multichannel furniture. Radio was It.

So it was smart marketing in 1924 when the Republican Party broadcast its convention June 10-12 via radio. As the Arkansas Gazette reported, speeches and “57 different kinds of sound” were conveyed by telephone from Cleveland to 14 stations that carried the broadcast. Announcer Graham McNamee, a tenor who called boxing matches, was praised for explaining periods of chaos as the delegates were “just milling around.” But even the 20-minute roar after President Calvin Coolidge’s renomination got good reviews.

McNamee did so well he was hired to announce the Democratic National Convention’s radio broadcast, which opened June 24 in New York.

Events in Arkansas foreshadowed the pitched battle that unfolded at New York. In Ouachita County, the Democratic committee barred the Ku Klux Klan from its primary. Klansmen protested and, as this Page 1 of the June 28, 1924, Gazette reported, the state central committee agreed to hear them.

In Madison Square Garden and its smoke-filled backrooms, the Klan’s role in passing Prohibition gave it credibility with temperance advocates. The faction that opposed the Klan for its violence and its antipathy to Roman Catholics was unable to put an anti-Klan plank in the party platform. The party also split over the League of Nations.

As this page of the Gazette reported, the broadcast was so noisy that Coolidge had the White House radio turned off so he could concentrate. 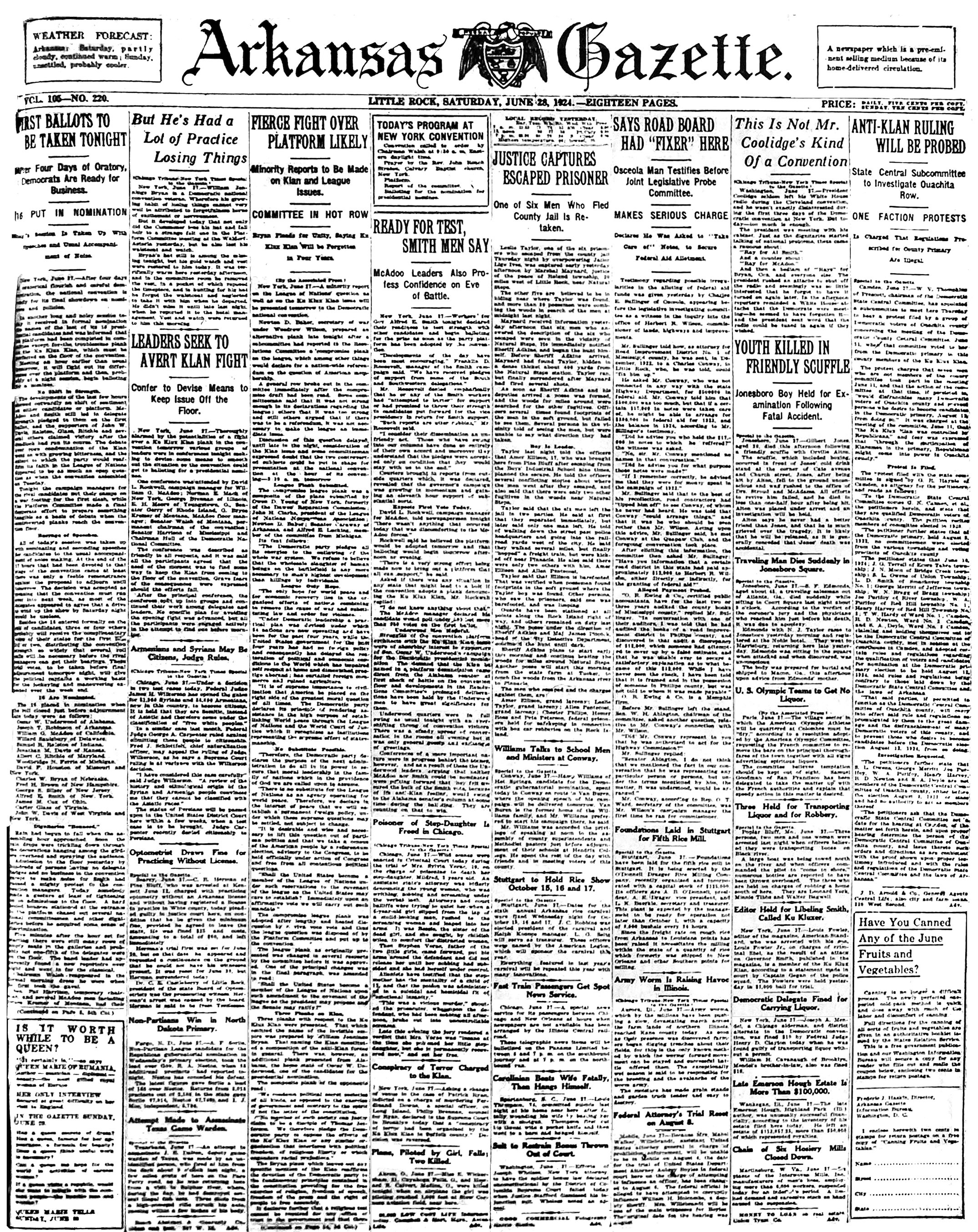