In 1936, state Attorney General Carl E. Bailey won a six-way election for governor. Bailey had famously refused a $50,000 bribe from mobster Lucky Luciano, who was hanging out in Hot Springs until Bailey allowed New York to extradite him.

Hot Springs was a Mafia mecca. To call this an “open secret” would be inaccurate because it was no secret at all, and to call law enforcement there “lax” would diminish the many roles avidly played by Mayor Leo P. McLaughlin’s machine.

Bailey took office in January 1937. On Jan. 30, officers of the state Revenue Department raided eight wealthy gambling houses at Hot Springs and removed $25,000 to $50,000 worth of roulette wheels, slot machines, poker chips. As reported by this Page 1 of the Jan. 31 Arkansas Gazette, a crew from the Terminal Warehouse Co. filled two large vans and a smaller truck with “gambling stuff” in the rain to drive it to Little Rock, where it was to be burned for the edification of interested citizens.

The rain — part of a larger story also evident on this page, the Great Flood of 1937 — delayed those trucks.

Thousands who had gathered at Fair Park expecting to see a show became discouraged and left. But hundreds swarmed back as the vans pulled up and the crew gleefully heaped up the paraphernalia. Doused in kerosene, the bonfire billowed 50 feet, and the “reflection of the blaze against the low hanging clouds could be seen for many blocks away.”

In a colorful analysis, politics reporter William A. Wilson reported that the new governor “had little if anything” to do with the search and seizure warrants written by Griffin Smith, chief justice of the state Supreme Court. Instead, Wilson suggested, a House committee that was investigating “alleged unlawful conditions” in the 18th Judicial District must have received reports of connivance between gamblers and county and city officials.

One recent suspicious event had been the Dec. 24 death of a young burglary suspect also accused of assaulting the Hot Springs chief of police. John Dickson was arrested on a bench warrant from the county circuit court and placed in city jail. From there he went to a city hospital and died while his father was begging McLaughlin to help find his son. The coroner declined to hold an inquest.

A Gazette editorial inside this edition cited the Dickson case as vitalizing the House committee’s probe. And on Page 5, The Servants of the People, a staff-written column, quoted an unnamed Hot Springs local’s thought that McLaughlin now would be driven from office.

After a four-week investigation, the House committee in February recommended against impeaching the Garland County circuit judge involved in the Dickson case.

In July 1937, U.S. Sen. Joe T. Robinson died. Bailey ran to replace him — with the support of McLaughlin, now a member of the Democratic State Central Committee. But U.S. Rep. John E. Miller, running as an independent, handily won the Senate seat. His reputation dented, Bailey recovered and remained governor for two terms. He even tried (in vain) for a third.

Meanwhile, McLaughlin was the power at Hot Springs until 1947. 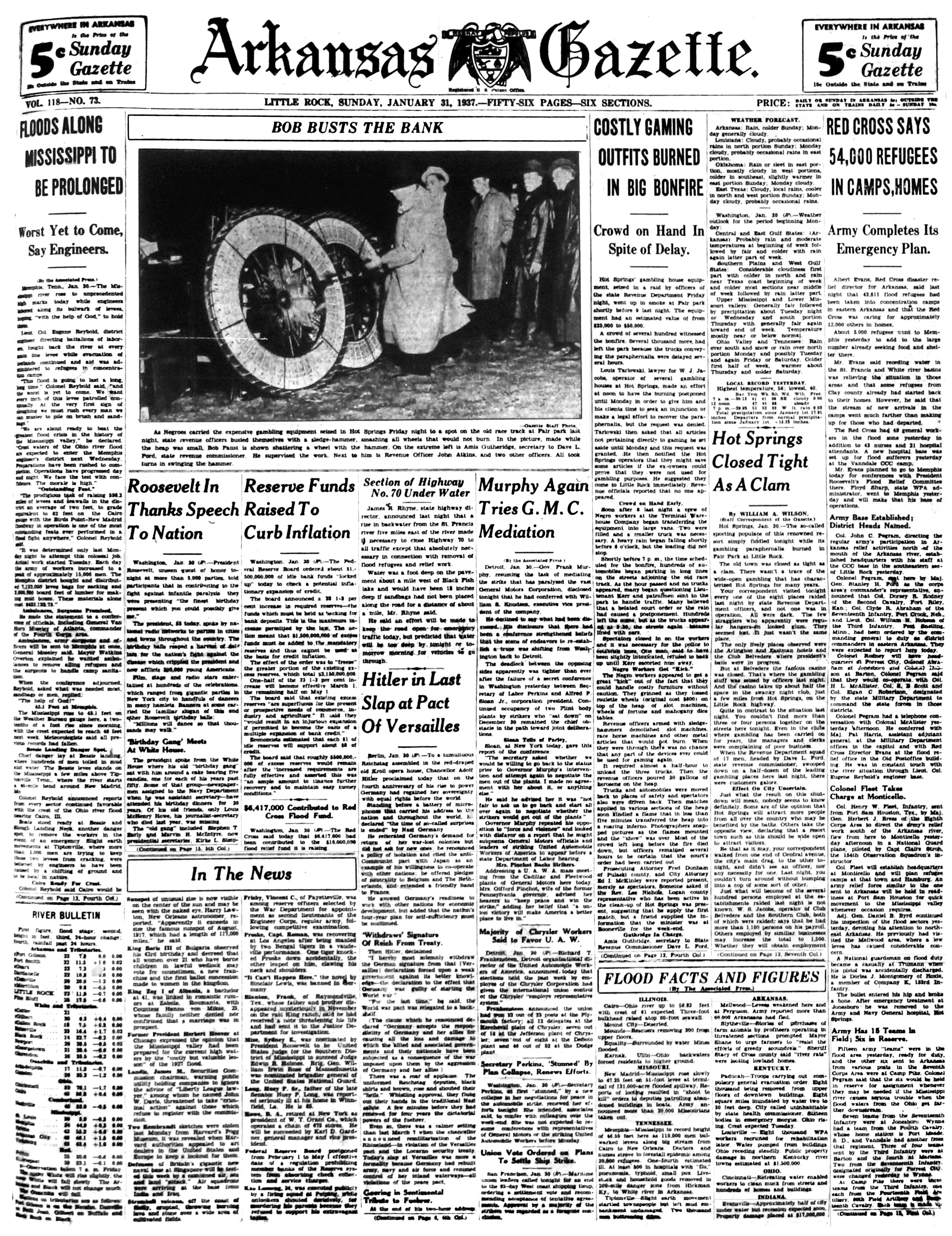