On June 25, 1950, Communist forces from North Korea invaded the southern Republic of Korea. It was the beginning of a conflict now known as the Korean War, in which more than 6,000 Arkansans served, 461 of whom gave their lives.

On June 28, President Harry S. Truman mobilized the U.S. military for an aerial assault on North Korea; American soldiers in occupied Japan were among those sent to Korea as part of an allied U.N. force.

The “steamroller” momentum of the Communist forces seemed to overtake everything in its path, but by September, the U.N. forces were beginning to turn the tide.

Pleased with the results of an amphibious invasion of Inchon and the simultaneous breakout from the Pusan Perimeter on Sept. 15, which had precipitated a North Korean retreat, Commander of the United Nations forces Gen. Douglas MacArthur promised the soldiers they’d be home by Christmas.

In early October, the U.N.’s X Corps crossed into North Korea. Composed of the U.S. 1st Marine Division, 3rd and 7th U.S. Army Infantry Divisions, and a detachment of British Royal Marines, X Corps had orders to advance to the Yalu River. They were to travel an 80-mile stretch of mountain road that led from Hungnam on the coast up to the Chosin Reservoir (Changjin Reservoir as reported in the Arkansas Gazette). The gravel route was often only wide enough for one vehicle as it ribboned up and down rugged peaks with “commanding ridges” on each side.

It was also dangerously cold. The men took turns sleeping, waking each other to keep their feet from freezing while they slept. Many would lose their feet to frostbite.

As the U.N. force trudged northward, MacArthur dismissed reports of possible Chinese intervention even as the Marines watched a force of 120,000 Chinese soldiers mobilizing, with “explicit orders to annihilate the Americans.”

When the northernmost U.N. forces were about halfway to the Yalu, the Chinese attacked. As the outnumbered Marines repelled assault after assault, they often ran out of ammunition or their weapons froze in the cold: “The Marines were … forced to defend their overrun lines in vicious hand-to-hand fighting.”

On Dec. 1, they received the order to withdraw to the port city Hungnam, where the U.S. fleet would be waiting. But the scattered Marines first would have to fight their way back to the cities farther south where their comrades were surrounded, then plot another breakout to the port, all the while harried by Chinese.

Most of the men finally reached the port Dec. 11. A headline from this Page 1 of the Gazette’s Dec. 11 edition called their “tortuous” 50-mile retreat a “freezing 12-day bloodbath.” Jack Macbeth, an Associated Press reporter traveling with them, wrote of their utter exhaustion, noting “the men’s eyes and bearded faces, their tattered parkas and the strangely careless way they carried their rifles.”

Robertson notes that “in Arkansas, as well as across the country, citizens rallied behind the ‘Chosin Few.’” One of Arkansas’ Chosin veterans, “perhaps summed up the feeling of most veterans of the campaign when he said, ‘We weren’t heroes I don’t think, but we did what we had to do.’” 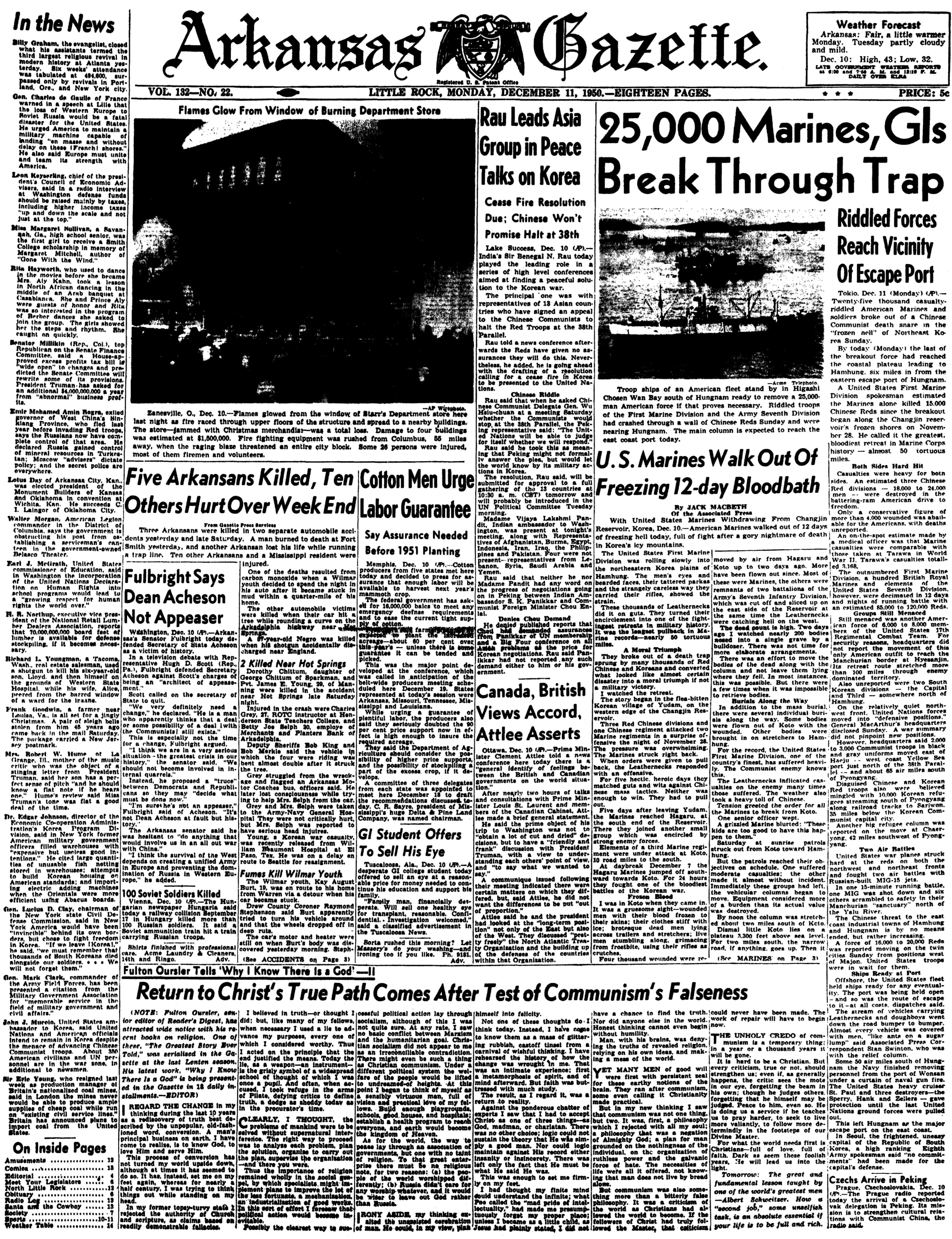