This Page 1 of the Arkansas Gazette appeared May 25, 1959, on the morning of a momentous School Board election in Little Rock.

With all four of the city’s public high schools closed for the school year by Gov. Orval Faubus to prevent their desegregation, three members of the city’s six-member School Board had taken it upon themselves May 5 to fire 44 district employees — teachers and administrators who supported the NAACP.

The other three members — Everett Tucker, Russell Matson and Ted Lamb — opposed the dismissals, aka “the purge.” They had walked out May 5 so there would be no quorum.

As Ben F. Johnson recounts in his recently updated Arkansas in Modern America Since 1930, members of the National Association for the Advancement of Colored People were banned from state employment under Act 115 of 1958. Act 115 was one of a group of laws the state Legislature passed in reaction against the integration of Little Rock Central High School by nine black students during the 1957-58 school year. One law empowered Faubus to close any school that was under a desegregation order; another, Act 10, required public school teachers to take a loyalty oath and swear out an affidavit listing all the organizations they supported.

The board had met May 5 to review its compliance with Act 115.

A recall election was quickly demanded by two opposed sets of outraged citizens:

The Committee to Restore Our Segregated Schools (CROSS), the Mothers League of Central High School, the Capital Citizens Council and the States Rights Council campaigned to dump the three board members who walked out.

In the other corner was the Women’s Emergency Committee to Open Our Schools (which had grown from an initial 58 members to 1,400), the Parent-Teacher Association and Stop This Outrageous Purge (STOP), a hastily assembled committee of 179 businessmen and lawyers.

The Gazette’s front page editorial explained that voters faced a choice between recalling the three segregationist board members — Ben Rowland, R.W. “Bob” Laster and Ed I. McKinley — who fired the teachers, or recalling the other three, who wanted the district to desegregate without further delay, as the U.S. Supreme Court had ruled that it must.

Voters also had the option of removing all six members, a choice seen as favoring segregation.

Turnout was heavy, and as the Gazette reported May 26, delivered a narrow but decisive victory for STOP. With about 25,000 votes cast, the three STOP-backed School Board members were retained by margins ranging from 50.8% to 52.4%. The three pro-segregation members were removed by percentages ranging from 52.9% to 55.5%.

In June, the Pulaski County Board of Education appointed three new board members to replace those recalled. With the addition of state Rep. J.H. Cottrell Jr. and businessmen Henry Lee Hubbard and B. Frank Mackey, Tucker, Matson and Lamb rehired 39 of the 44 employees fired May 5.

A three-judge U.S. District Court declared the state’s 1958 school-closing law unconstitutional, and the Little Rock School Board announced that it would not appeal the decision. It would reopen its high schools in the fall. The district’s “Lost Year” was over.

To read a timeline of events from the two-year aftermath of the integration of Little Rock Central High School, see arkansasonline.com/200/1959bonus. 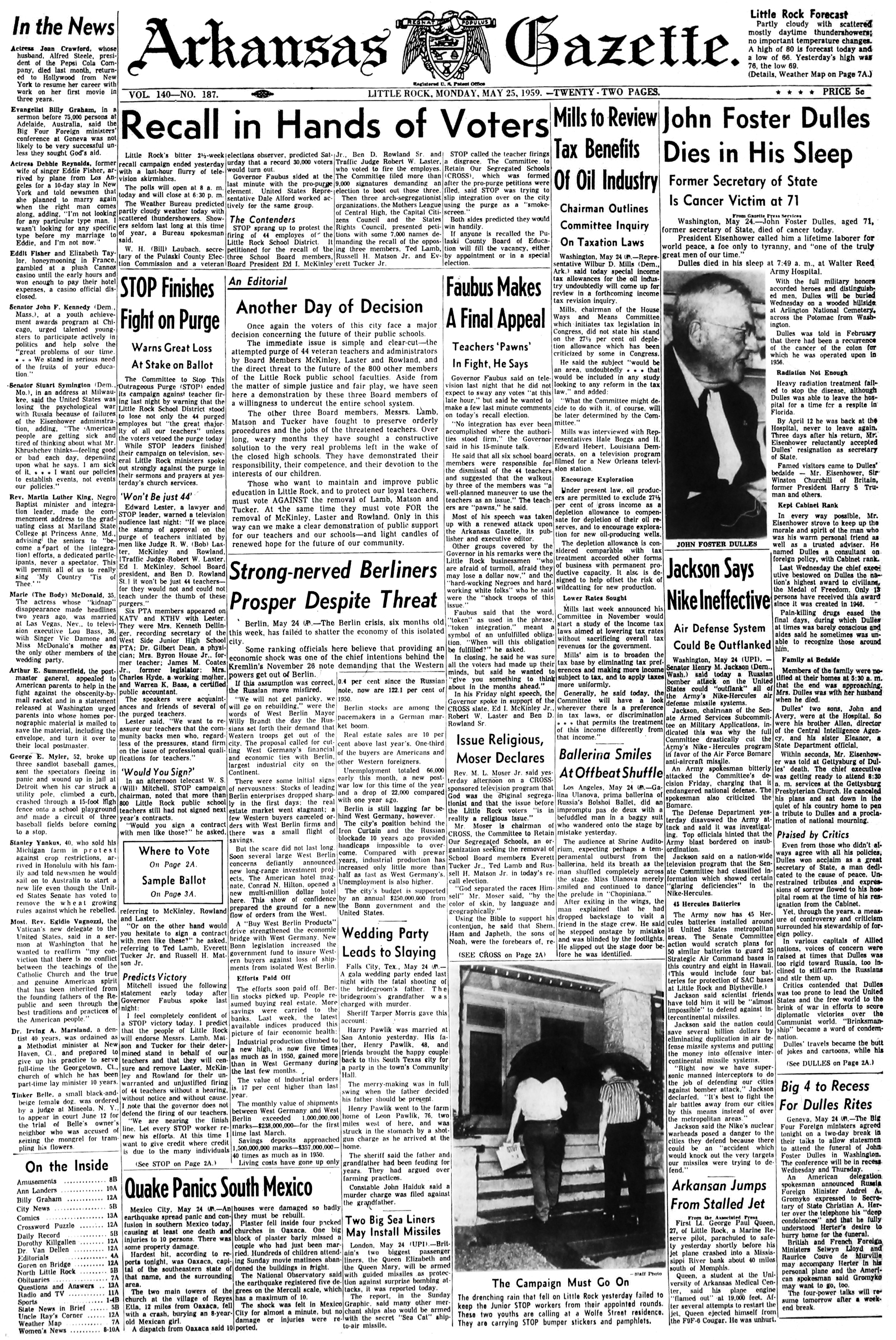