In April 1961, the United States armed and aided a failed invasion of Cuba by exiled enemies of then-Prime Minister Fidel Castro. This misadventure is known today as the Bay of Pigs fiasco.

Today historians know that President John F. Kennedy authorized the action during his first weeks in office, accepting a CIA plan that originated under his predecessor, Dwight D. Eisenhower. After ousting Cuban dictator Fulgencio Batista, Castro had seized U.S. assets and cozied up to the Soviet Union. Eisenhower authorized the CIA to train exiles as a guerrilla band that could slip into Cuba to overthrow Castro.

Something was lost in translation between the outgoing and incoming presidents. According to essays by historian Joshua H. Sandman and foreign relations scholar Rebecca R. Friedman published in 1987 and 2011, respectively, by the journal Presidential Studies Quarterly, the sneaky guerrilla band ballooned into an amphibious assault by 1,400 Cuban exiles — Brigade 2506 — backed by sea and air support.

And there would be a cover story suggesting an uprising by Cuban rebels.

The invasion, when it came, was no secret. American newspapers including the Arkansas Gazette followed the story with front page reports from wire services. First, on April 16, 1961, the Gazette reported that Cuban pilots had turned against Castro and bombed three key bases. Two World War II era B-26 bombers landed at different ports in Florida. One pilot claimed they were defectors and asked that their names be withheld to protect families still in Cuba.

Cuba’s then-President Osvaldo Dorticos scoffed at the notion of anonymous defectors with vulnerable families. “If any of our pilots or planes were missing don’t you think we would know who they were?” he asked. Castro gave a fiery two-hour speech in which he likened the raids to Japan’s attack on Pearl Harbor.

April 18, the Gazette reported an uprising by Cuban rebels. Meanwhile, pro-Castro protests, some sedate but most violent, broke out in Brazil, Uruguay, Argentina, Colombia, Venezuela, Honduras and Mexico. A mob stoned the U.S. Embassy in Moscow, and Soviet premier Nikita Khrushchev — known to Gazette headline writers as “Nikita” — sent Kennedy a curt rebuke.

As this Page 1 of the April 20 Gazette reports, Castro crushed the invasion on swampy beaches along the Bay of Pigs in southern Cuba.

Friedman writes, “The exile army expected U.S. air cover that never arrived. Communications between Kennedy and the commanders in the field were practically non-existent. Castro’s military and political strength was underestimated, as there was no ready force of Cubans on the island ready to take on the communist dictator. Allies, both Latin American and European, were not consulted.”

Sandman writes that Kennedy analyzed the disaster as his fault for relying on intelligence agencies without debate. He assembled a team to argue foreign policy pros and cons, adding to the federal intelligence advisers his brother Robert, who was attorney general, and his “intellectual blood bank” Ted Sorensen. Debating options, Sandman writes, helped Kennedy to stare down Khrushchev in 1962 when the world teetered on the brink of nuclear war — because the Soviets had planted ballistic missiles on Cuba. 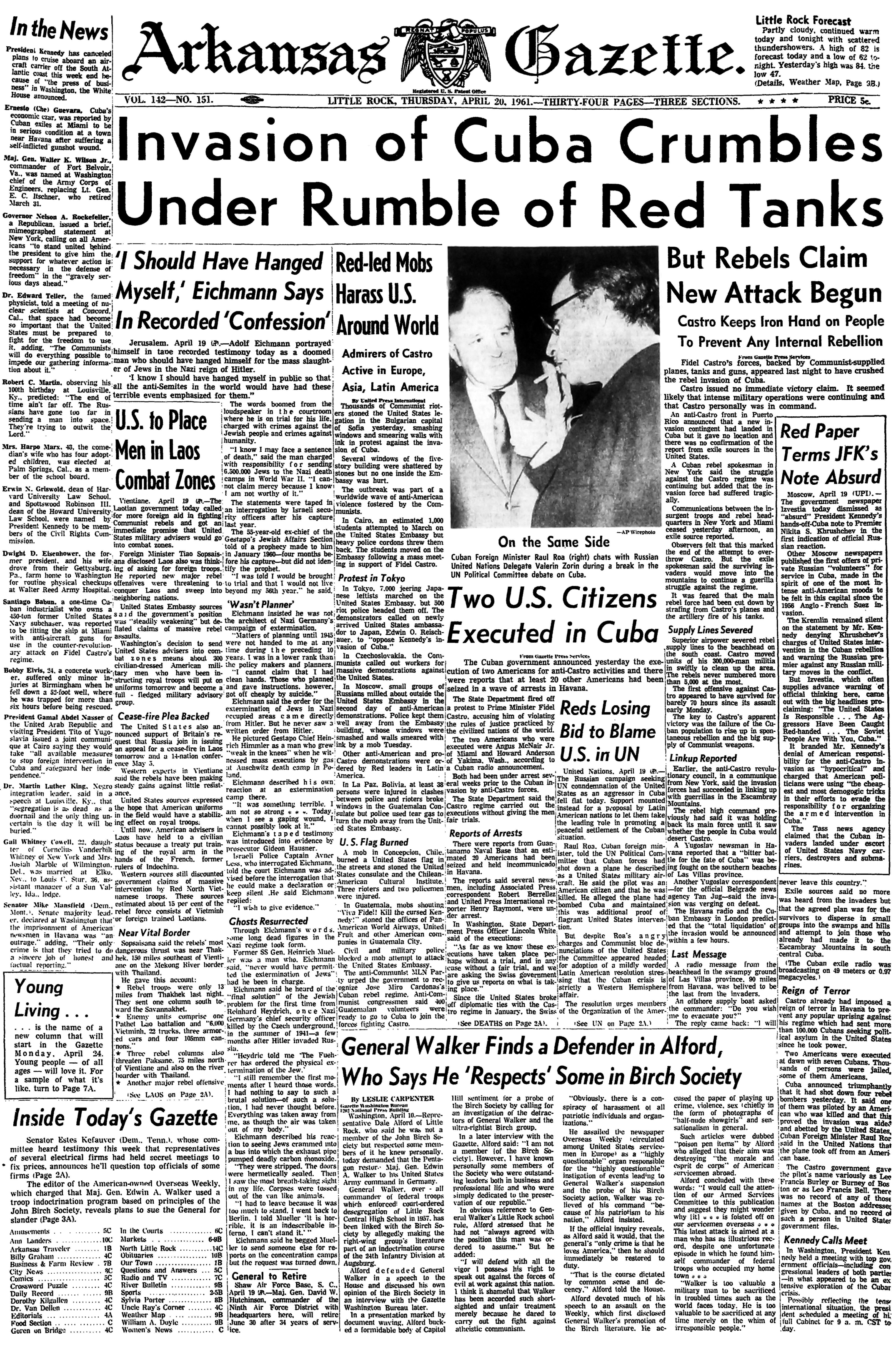