Winthrop Rockefeller, who fought for a two-party system and revitalized the Republican party in Arkansas, defeated Democrat “Justice” Jim Johnson in his bid for governor, this Nov. 9, 1966, front page of the Arkansas Gazette shows. The Gazette cites The Associated Press for the most recent vote totals, which at that point were 233,483 for Rockefeller to Johnson’s 207,318. At press time, Rockefeller hadn’t claimed victory and Johnson hadn’t conceded, but there was a clear winner.

The voters who chose him warranted some words in the Gazette — Mississippi County Democrats “split with their Party organization to support him” and his lead in eastern Arkansas counties was at least partly due to black residents’ support.

Rockefeller criticized Johnson for his closeness to Faubus, and argued that a two-party system was the best way to avoid government corruption. He worked to build the Republican Party, starting in 1960.

As the Gazette put it, “The main issues of the campaign were the candidates themselves rather than their platform”: Johnson’s as a segregationist and Rockefeller’s as a New Yorker.

Johnson’s stance on integration attracted like-minded segregationists but “drove many moderate Democrats into the Rockefeller camp,” causing Rockefeller to be elected Arkansas’ third Republican governor in the state’s 130-year history, the Gazette stated. His predecessors, Powell Clayton and Elisha Baxter, both served in the 1800s during Reconstruction.

Rockefeller went on to serve two terms, and his son, Winthrop Paul Rockefeller, became Arkansas’ lieutenant governor. The younger Rockefeller launched his own campaign for governor in 2005, but ended his bid due to ill health, according to The New York Times.

Gov. Rockefeller’s millions made no little impact on the state. The Winthrop Rockefeller Institute still stands atop Petit Jean Mountain, where the businessman started his cattle farm in 1953 when he moved to Arkansas. And as former Arkansas Arts Center executive director Todd Herman said in 2016, Rockefeller and his second wife, Jeannette Edris Rockefeller, “led the charge to make an Arts Center for all of Arkansas a reality.” 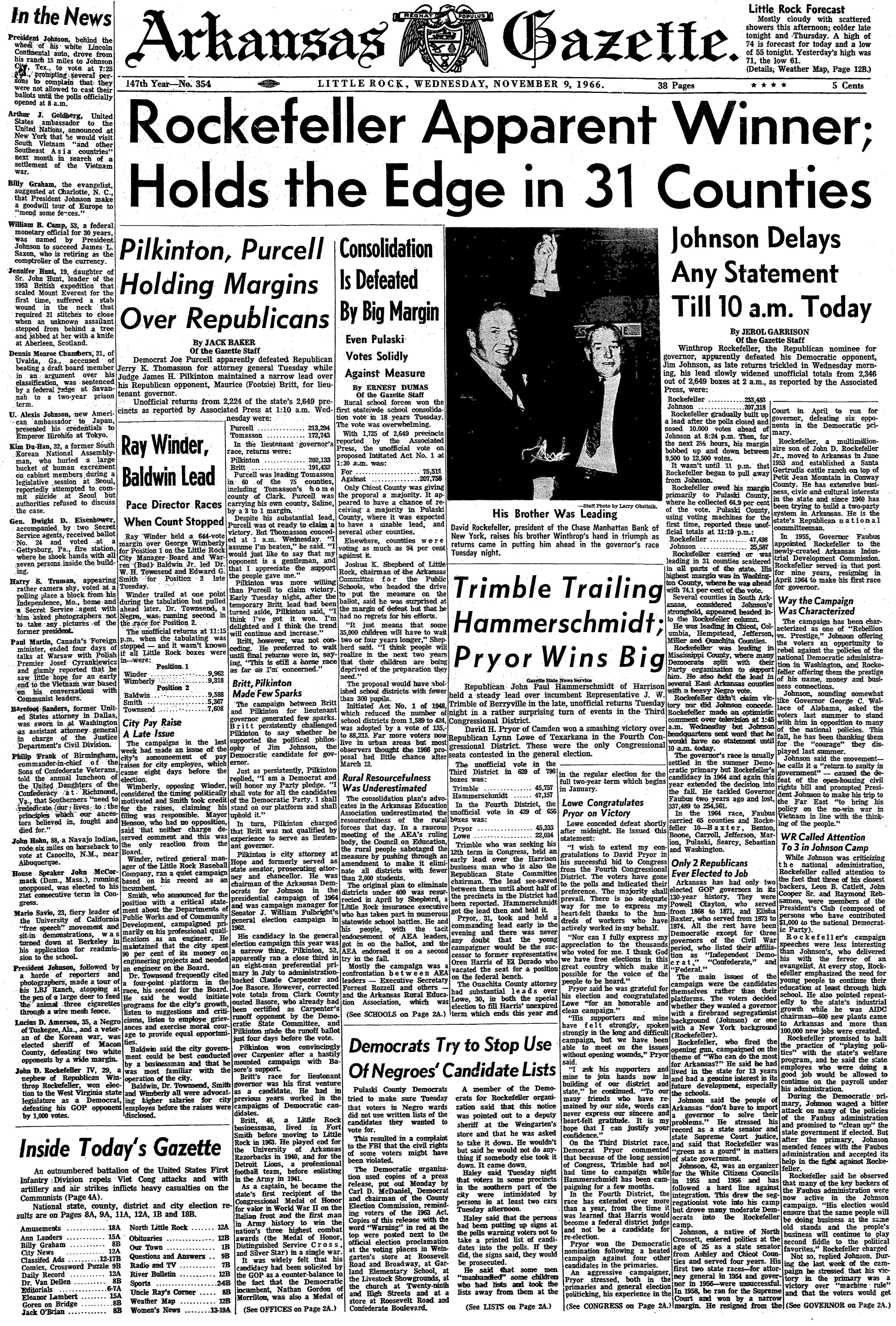