Only one front-page story was bordered in black April 5, 1968, the day after the Rev. Martin Luther King Jr. was killed: the civil-rights leader’s last words.

“I want you to play a spiritual, ‘Precious Lord, Take My Hand,’ at our rally tonight,” the 39-year-old Baptist minister and then-world’s youngest Nobel Peace Prize recipient said as he leaned over the second-floor balcony of Memphis’ Lorraine Motel. “I really want you to play that tonight,” King told pianist Ben Branch.

“Then a shot rang out,” the report read, “and King staggered back and fell to the floor, wounded in the neck and jaw.”

A Browning automatic rifle was found abandoned a block away on Main Street. Police across the river in Arkansas were told to look for a dark-haired white man in a dark suit driving a white Ford Mustang. There was little else to say about who could have done this and much more to say about what was gone.

Four-thousand National Guardsmen were sent to Memphis as crowds raged, with firebombs thrown and shots taken at police officers, wounding two. Riots and looting were reported in at least seven other cities, but not in Arkansas.

In Vietnam, U.S. Marines had just turned back a counterattack at Khe Sanh — which filled the other side of this Page 1 — and there was a rumor that the Vietcong wanted to talk peace. But President Lyndon Johnson canceled a Honolulu meeting with commander Gen. William Westmoreland and stayed home to publicly plead for peace.

“For those of you who are black, who are tempted to be filled with hatred at the injustice of such an act, I can also feel in my own heart the same kind of feeling. A member of my family was killed. He was killed by a white man. But we have to make an effort in the United States to go beyond this.”

In Arkansas, Gov. Winthrop Rockefeller called upon the people “to remain calm and exercise restraint as responsible citizens.”

The Gazette’s editorial mourned King, who had visited Little Rock 10 years earlier to attend the Central High graduation of Little Rock Nine member Ernest Green. The paper said his death “stirs new introspection about a sickness in the American society, with its accelerating incidence of crime and of violence, even murder, in the settlement of the issues that divide us.”

Rockefeller spoke at a prayer service on the state Capitol steps April 7 with a crowd 3,000 strong, the only Southern governor to support such a memorial. “The stigma of color must have no place in our hearts and our minds,” he said. At the end of the service, he and his wife joined hands with the crowd to sing “We Shall Overcome.” 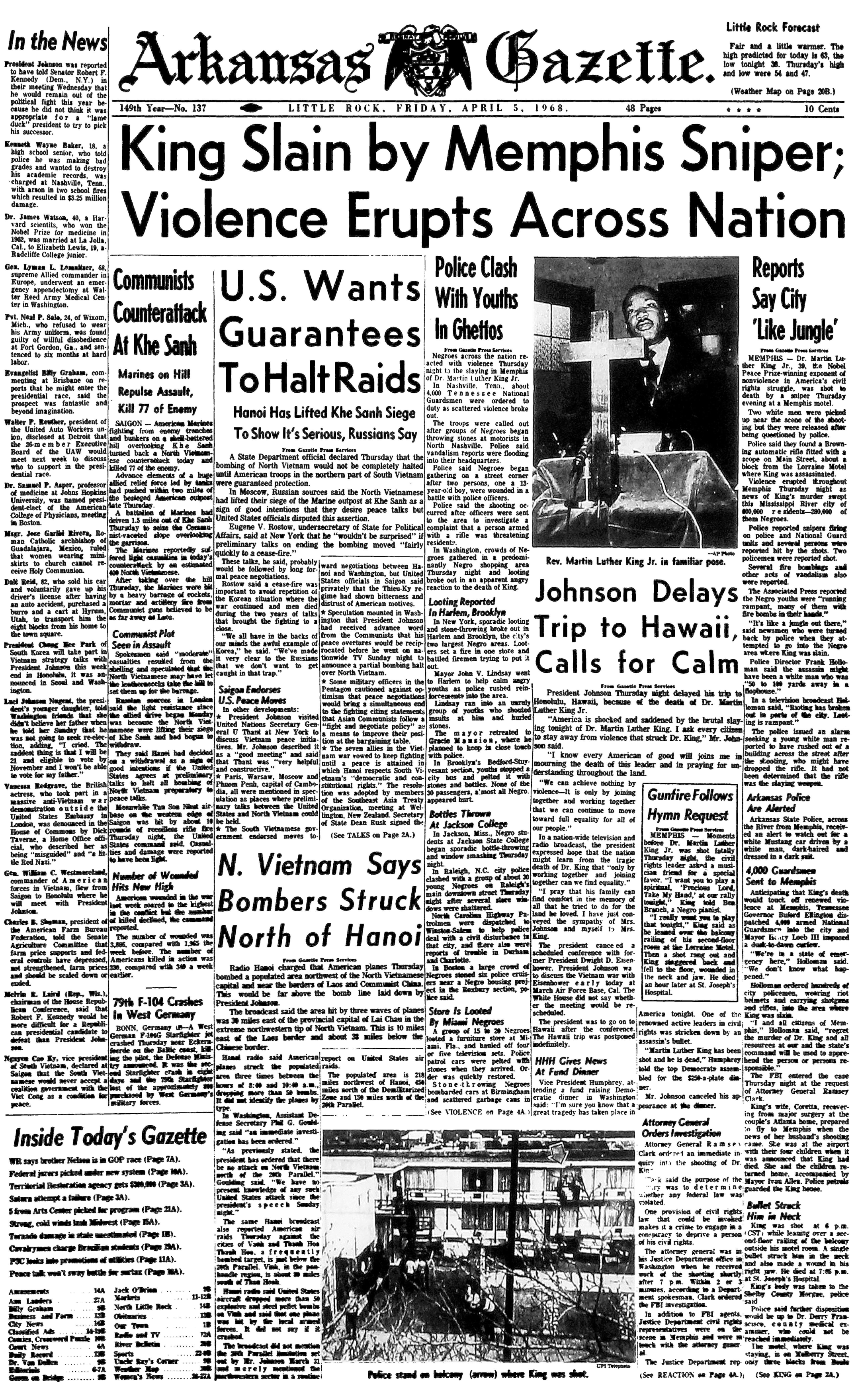