The year 1969 was full of momentous headlines. The moon landing. The civil rights struggle. The war in Vietnam. Hurricane Camille. Woodstock. But for many Arkansans, the Big Shootout holds the most indelible place in their memory and their hearts.

The lead headline in the Arkansas Gazette Dec. 7 front page delivered the sad news: “Texas Stops the Hogs A Heartbeat Away.”

The Dec. 6 matchup between No. 1 Texas and No. 2 Arkansas had fanned a frenzy in football circles, nowhere more fervently than Fayetteville, where the nationally televised showdown between the undefeated Southwest Conference rivals took place on a cold, drizzly afternoon before an overflow crowd of 44,000.

The game, moved to the end of the regular season at the request of ABC, and with the acquiescence of Arkansas Coach Frank Broyles and Texas Coach Darrell Royal, drew A-list celebrities, the most notable being President Richard M. Nixon.

The game story by intrepid Gazette sports editor Orville Henry ran with, not a game photo, but a shot by staff photographer Gene Prescott of a grinning Nixon sitting with Arkansas Gov. Winthrop Rockefeller.

Arkansas had the lead, 14-0, after three quarters. The Longhorns’ high-octane, high-scoring Wishbone attack had been kept in check all day. Then Texas’ James Street “seized the bit.” First the Texas quarterback “bolted 42 yards to a touchdown after he’d been forced out of a passing pocket,” then scored a 2-point conversion on a counter option play. Now, a touchdown and extra point could win them the game.

Henry set the scene: “What the Monday quarterbacks will debate all winter is the denouement of the semifinal push, one that reached the Texas seven-yard line” with the Hogs still up 14-8 with nine minutes to go. Arkansas could have kicked a field goal for a somewhat comfortable lead, “but the Arkansas board of strategy elected to go for a touchdown” with a pass attempt by Bill Montgomery to Chuck Dicus. The pass, alas, was intercepted, and Texas drove for the winning score.

A feature by staff writer Leroy Donald also ran on Page 1: The Rev. Billy Graham delivered the invocation. Beauty queens paraded around. Protesters for and against the war had their say. The bands marched in, first Texas, “then came the Razorback band members in their new red and white West Point style dress, looking for all the world like Napoleon’s troops marching out to stop the enemy.” Nixon’s helicopter arrived just as the Razorbacks scored the first touchdown. Four copter loads of the Washington press corps followed. And then the end: “The expected rain held off until the fourth quarter. The black umbrellas went up as the Texans went in for two touchdowns and the victory. And THE game was all over.”

And Arkansans were left with bitter memories. On another big day in 1969 man walked on the moon. See arkansasonline.com/200/1969bonus.

Bonus from the Past: Click here to see the Gazette's front page after a man walked on the moon. 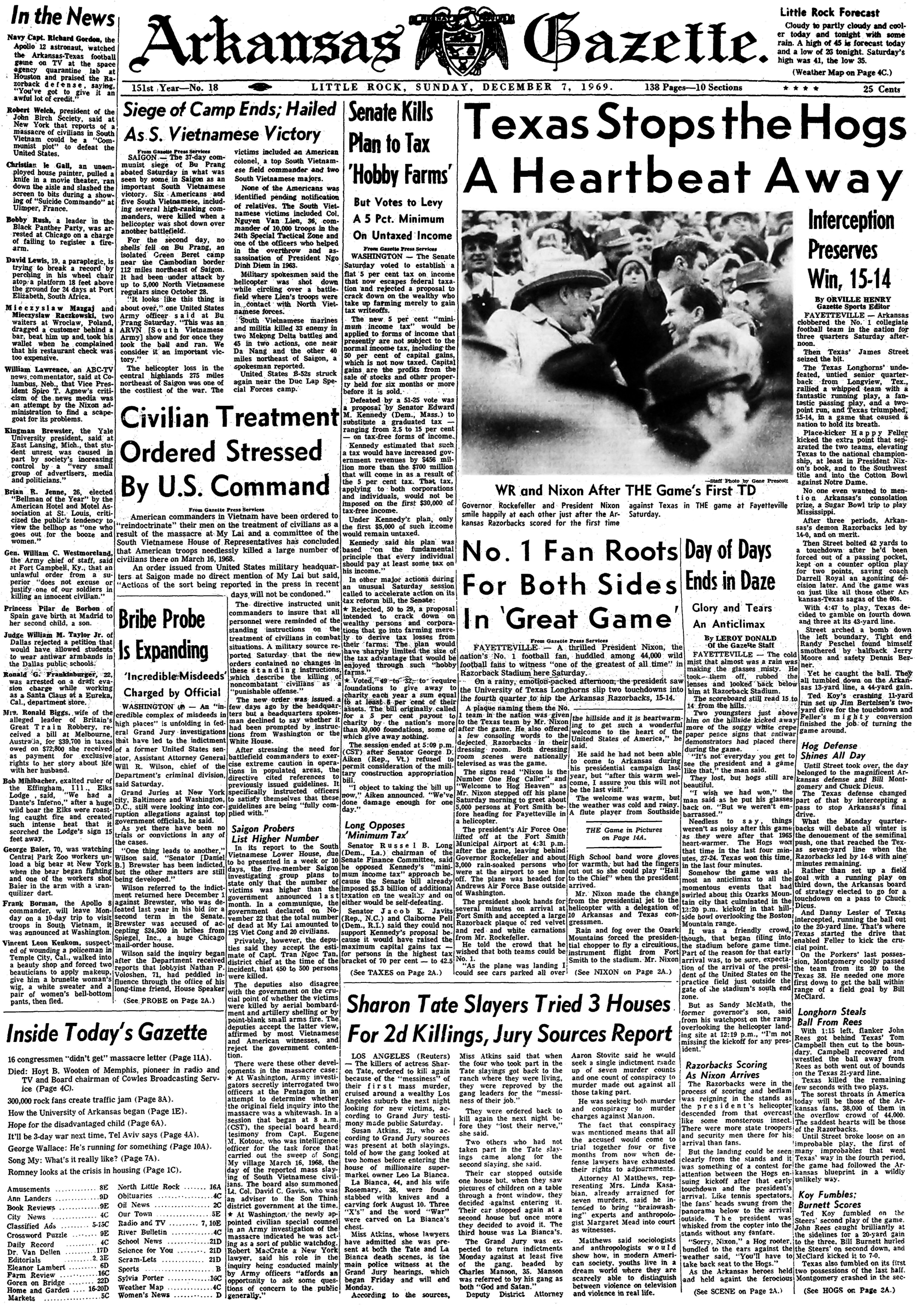