The 8th U.S. Circuit Court of Appeals on Monday reversed a federal judge's decision granting a temporary injunction to eight inmates that Arkansas plans to execute this month.

The court found that the evidence did not show the state's protocol for executing prisoners is very likely to "cause severe pain and needless suffering."

"Even assuming a risk of pain from the current method," the inmates did not provide a "known and available alternative" to Arkansas' execution method that would significantly reduce that risk, the opinion says. 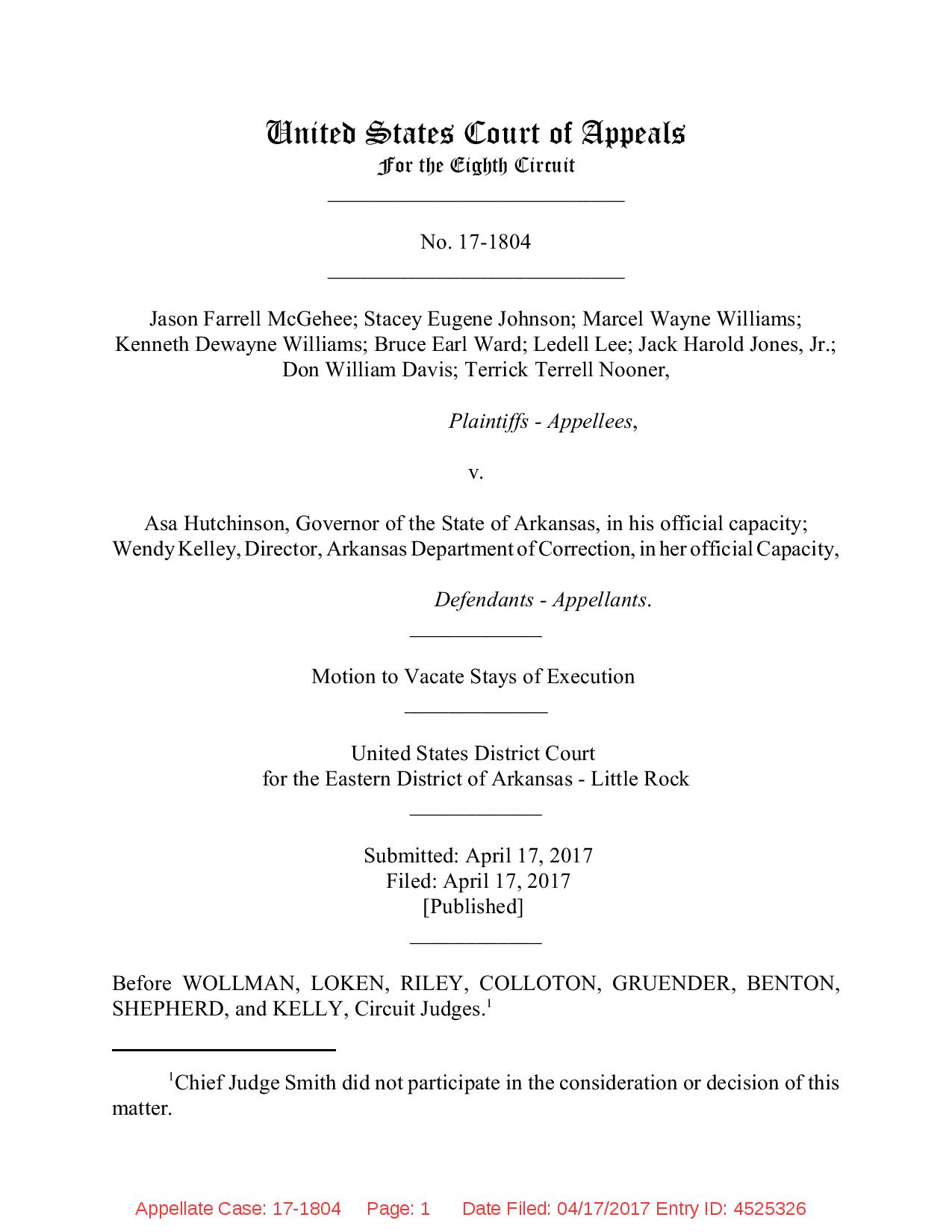 Inmates argued that the use of the sedative midazolam risked inflicting severe pain on the inmates over concerns that the drug would not render inmates unconscious before the second and third drugs, a paralytic and the heart-stopping potassium chloride, are administered.

Jeff Rosenzweig, an attorney representing some of the inmates, said they would appeal the decision o the U.S. Supreme Court "as soon as possible."

Those included replacing midazolam with a barbiturate more likely to render the inmates unconscious; using an inhaled anesthetic at such a high dose that it is the sole drug necessary; pumping nitrogen through a gas mask to deprive an inmate of oxygen; and deploying a firing squad.

The 8th Circuit said Arkansas was previously unsuccessful in obtaining barbiturates and that the inhaled anesthesia and nitrogen alternatives have never been used in executions. A firing squad "is allegedly painless only if the volleys are targeted precisely," the 8th Circuit opinion says.

In a separate ruling, the 8th Circuit also sided against the inmates in their appeal of Baker's ruling in which she said that the compressed execution schedule — originally eight inmates over 11 days — does not cause needless suffering and impede their right to counsel.

Don Davis and Bruce Ward, originally scheduled for execution Monday night, received stays from the Arkansas Supreme Court on Monday afternoon that prevents their lethal injection. The attorney general's office has said it will appeal those decisions.

Pulaski County Circuit Court Judge Wendell Griffen's temporary restraining order issued Friday remained in place as of 5 p.m. Monday. The ruling, issued after a pharmaceutical distributor claimed Arkansas used deceit to obtain one of the execution drugs, has been appealed to the state Supreme Court.

Check back with Arkansas Online for updates on this developing story and read Tuesday's Arkansas Democrat-Gazette for full details.