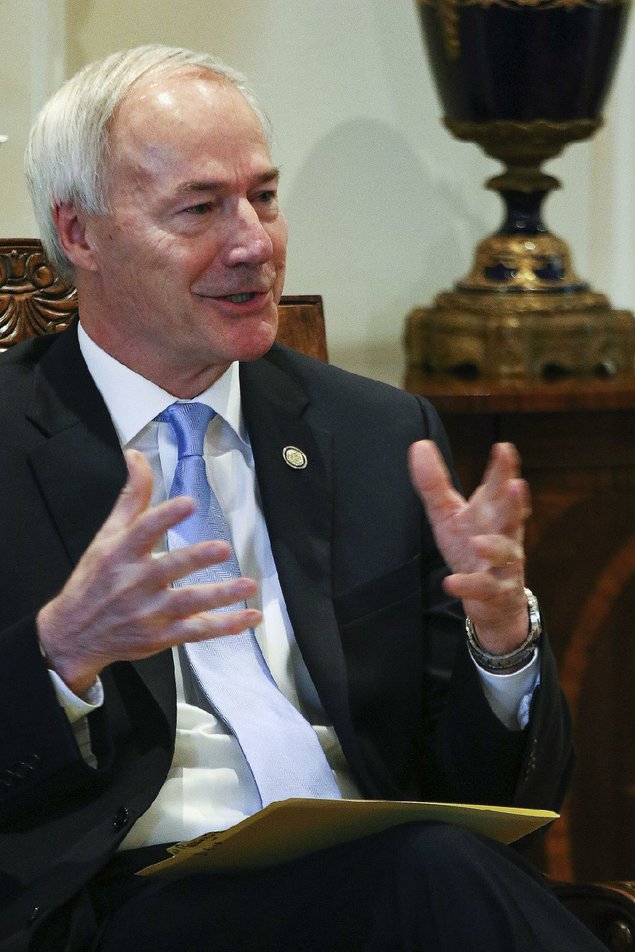 Gov. Asa Hutchinson joined a long list of predecessors as he oversaw Arkansas' first execution in more than 11 years.

The Republican also has entered into another group with his peers: those who have not exercised their power to grant clemency to death-row inmates.

Since Gov. Winthrop Rockefeller famously departed the Governor's Mansion after commuting all death sentences to life terms in 1970, only one other Arkansas governor, Mike Huckabee, has elected to use his power to spare a prisoner's life.

6 a.m. Saturday » Witness to killer's end: Remorse wasn't in him 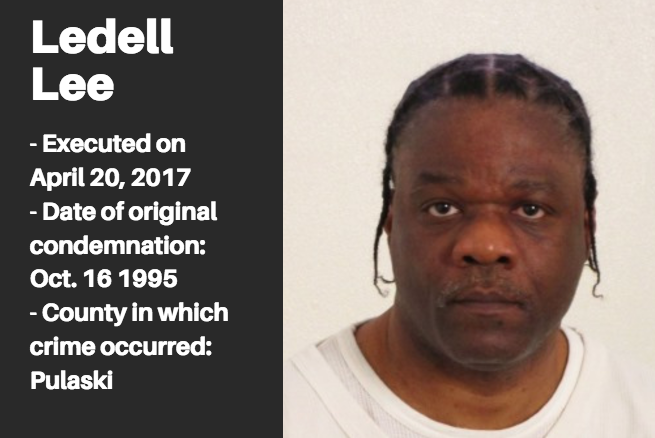 The departing silence of convicted killer Ledell Lee came as no surprise to the woman who sought the death sentence against him more than two decades ago.

The prosecuting attorney in his 1995 capital-murder trial, Holly Lodge Meyer, was one of a dozen Arkansans who witnessed Lee's execution Thursday night on behalf of the state. Others included a city attorney, a deputy U.S. marshal, a sheriff and two lawyers who tried diligently to have the execution called off.

Asked why she volunteered for the role, Lodge Meyer said Friday that she believed she knew the convicted killer's evil "more intimately" than anyone else, a belief that she said was perpetuated by Lee's silence Thursday.

"I thought that was consistent with his personality ... which I have found, through hours spent in the courtroom, is cold and calculating," Lodge Meyer said. 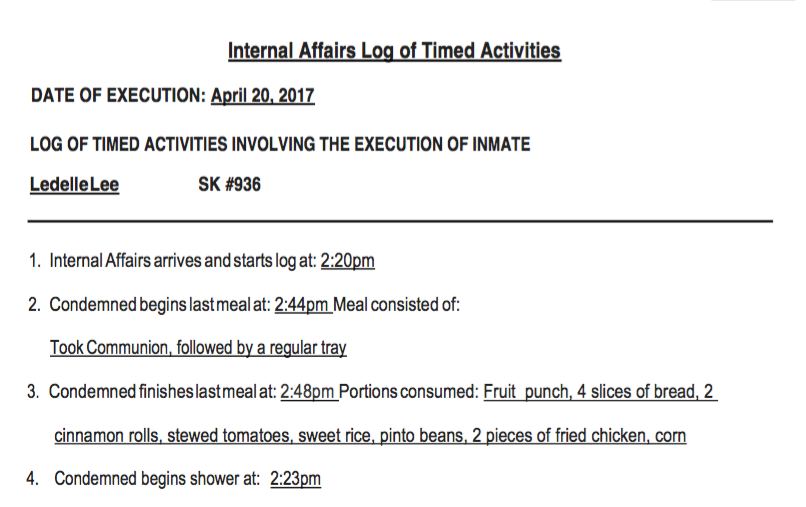 The Arkansas Department of Correction has released several documents filed in the execution of Ledell Lee, who was put to death Thursday night by lethal injection.

Among the documents are a minute-by-minute log of Lee's activities in the hours before his execution and a list of witnesses who watched his death.

Click here or the image above to browse the complete files. 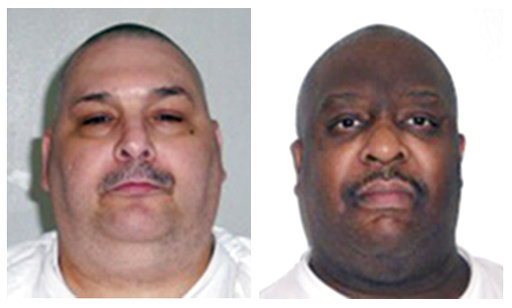 A federal judge says she won't block two inmates from being executed next week in Arkansas, rejecting the men's claims that their poor health could make the lethal injections especially painful.

U.S. District Judge Kristine Baker denied requests to stop the executions for Jack Jones and Marcel Williams, both of which are scheduled for Monday night.

Williams argues that his obesity and diabetes could make the lethal injections too painful. Jones argues that his diabetes, high blood pressure and other conditions could cause him to suffer an "extended and painful death."

Ledell Lee was executed Thursday in Arkansas' first execution since 2005.

Arkansas had scheduled eight executions over an 11-day period before the end of April, when its supply of one lethal injection drug expires. The first three executions were canceled because of court decisions. Legal rulings have put at least one other in doubt.

LITTLE ROCK — Arkansas' push to put eight men to death in less than two weeks has so far resulted in just one lethal injection, and legal experts say that shows the risks of pursuing the nation's most ambitious execution schedule since the death penalty was restored in 1976.

Ledell Lee was executed minutes before his death warrant was set to expire late Thursday. It was the first time since 2005 that Arkansas had put an inmate to death.

Three other planned executions were canceled this week because of court decisions. Another inmate scheduled for execution next week has received a stay. And three remaining lethal injections face similar hurdles.

"If I were in the state's shoes, I would be prepared for almost double the level of scrutiny," said Brian Gallini, a law professor at the University of Arkansas in Fayetteville.

At the heart of Arkansas' plans is the sedative midazolam, one of three drugs used in lethal injections. The state is racing to carry out the executions before its supply of midazolam expires at the end of the month.

State officials said Friday that they were prepared to move forward with the remaining executions, starting with a double execution Monday and a single execution Thursday.

Jack Jones and Marcel Williams are set to be executed Monday night.

Ledell Lee was executed Thursday in Arkansas' first execution since 2005.

Arkansas had scheduled eight executions over an 11-day period before the end of April, when its supply of one lethal injection drug expires. The first three executions were canceled because of court decisions. Legal rulings have put at least one other in doubt.

Executions are set for three more Arkansas inmates by the end of next week, though legal obstacles, as with four other cases this month, remain.

The state was able to carry out one execution Thursday night, marking the first time it had been able to do so in over a decade.

Jones was found guilty in the death of Mary Phillips, who was beaten, raped and choked with an electrical cord in June 1995.

Earlier this month, Jones said that he would decline clemency if granted. He also did not appear at his latest clemency hearing.

Instead, his attorney, Jeff Rosenzweig, read a letter that Jones had written apologizing for what he had done.

Marcel Williams was convicted in the abduction and killing of Stacy Rae Errickson as she stopped at a Jacksonville gas station in November 1994.

In August 2000, Kenneth Williams was condemned in the October 1999 fatal shooting of farmer Cecil Boren, who was doing yard work while his wife was at church.

Ledell Lee, convicted in the February 1993 death of Debra Reese, was pronounced dead at 11:56 p.m. Thursday, just four minutes before the expiration of his death warrant.

Bruce Ward, Don Davis, Stacey Johnson and Jason McGehee have been spared from April executions as a result of legal challenges.

11:24 a.m. » Firm asked state not to use drug in executions months before 'donation,' letters show

A drugmaker asked Arkansas officials not to purchase its products for executions months before the state accepted a third-party "donation" of potassium chloride as one of three drugs to use in lethal injections, according to letters obtained by The Associated Press.

Fresenius Kabi USA wrote to Department of Correction Director Wendy Kelley and other officials last July saying the company was aware Arkansas wanted to buy drugs to carry out executions and asking the state not to violate contracts between Fresenius and its distributors that forbid the distributors from selling the drugmaker's products for use in capital punishment.

Fresenius has since identified itself as the possible maker of the Arkansas' supply of potassium chloride — which Kelley recently testified she obtained by driving to an undisclosed location to meet an unnamed distributor, who when told about the billing process chose to "donate" it rather than create a record of the sale. 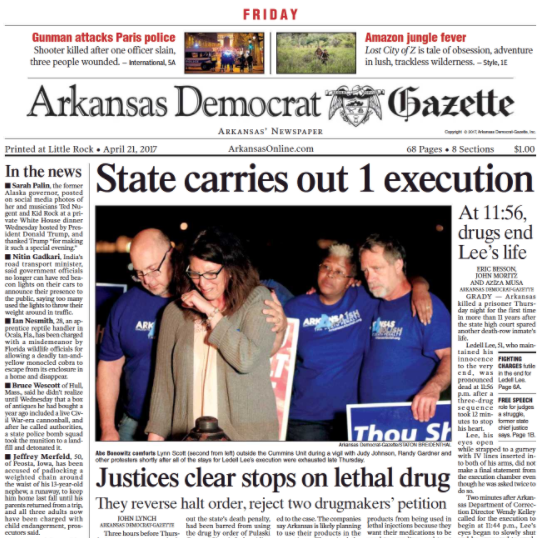 —For Ledell Lee, fighting verdict to the end futile